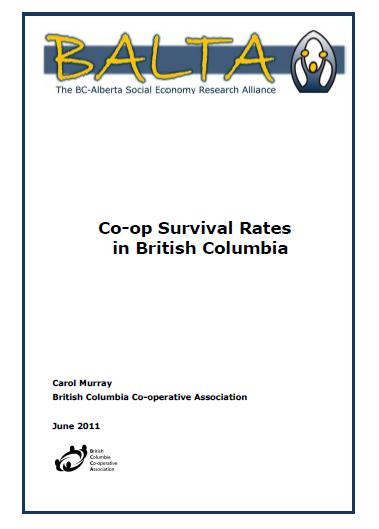 This is the final report of the British Columbia component of research that was conducted by the BC-Alberta Social Economy Research Alliance (BALTA), the Alberta Community and Co-operative Association (ACCA) and the British Columbia Co-operative Association (BCCA) on survival rates for newly incorporated co-operatives in both provinces and factors which influenced survival. The research found that co-ops experience significantly higher survival rates than other forms of business start-ups.

The 5-year survival rate in B.C. was 66.6%. By contrast, Industry Canada figures show a 43% and 39% 5-year survival rate for conventional business start-ups in 1984 and 1993 respectively. In BC, business start-ups in 1984 experienced a 38% 5-year survival rate. Successful co-ops identified the following factors as being key to their development and survival: • Acquisition of capital & strong financial planning & management • Member engagement & board involvement & expertise • Training & enlisting outside consultant expertise and support • Business planning and clarity of purpose. The report includes recommendations for ways to enhance support to co-operative development and survival.