Social enterprises are springing up in every nook and cranny you can imagine.  Some are even hard to get to.  A few weeks ago, a diverse group of non-profit, community, and trades workers, as well as members of the media, boarded a bus to visit one of Manitoba’s newest and boldest social

enterprises, Aki Energy. The tour, co-sponsored by BUILD and the Canadian CED Network, was a method of bringing whoever was interested in direct contact with the work being done and the people doing it.

What unfolded was a story seldom seen by your average urban Canadian, or covered in the mainstream media. Aki Energy, along with the communities that support it, smashes the nefarious misconception that First Nations are takers, recipients, and unwilling to work. The tour showed off two communities that were active, innovative, and eager to work. What’s more is that they are themselves the engine of change. The power of social enterprise was already quite evident.

Aki Energy is a young Aboriginal social enterprise. It was incorporated in early 2013, with its 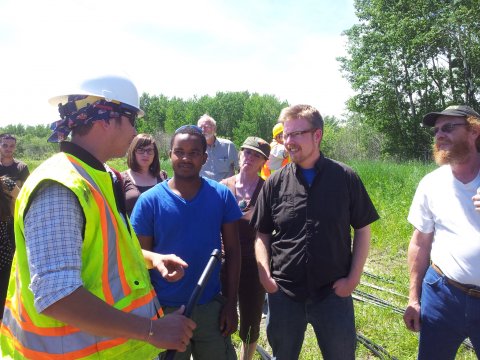 operations only running since the spring. For now, Aki installs geothermal heating systems on two reserves, Peguis First Nation and Fisher River Cree Nation. Workers are local people who face multiple barriers to employment. Aki Energy connects Aboriginal workers to the green economy, which benefits the community, the environment, and, hopefully, the workers themselves.

The Aki model has become even more viable recently as the Manitoba Government and Manitoba Hydro put into effect PAYS (Pay As You Save), the first piece of legislation of its kind in North America. PAYS reduces the cost of a retrofit from $22,000 to $14,600, a significant amount of which is labour, meaning that it will stay in the community. The initial plan is fifty units for this year. Eventually, Aki hopes to retrofit most of the 1,000 housing units on the two reserves.

Manitoba currently boasts the highest rate of geothermal installations per capita in Canada, and for good reason. By harnessing the naturally stable temperature beneath the earth’s surface, geothermal energy is able to provide green heat and cooling for one third of the cost of traditional systems.

After departing from Neechi Commons, the first stop was a job site in Fisher River Cree Nation. The 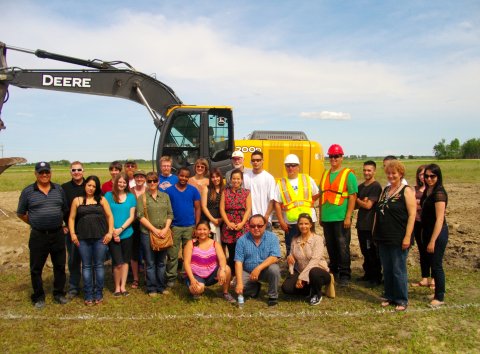 crew was installing a geothermal pump that will heat the new community fitness centre, which remains in the early stages of its construction. Geothermal is three-to-five times more efficient than electricity. The Fisher River site was the earliest phase of the geothermal installation process, with the other sites, of which there were three in Peguis, each showing a subsequent stage in the installation process. The tour of the sites imparted a familiarity with the first set of Aki Energy’s workers, as well with the installation process. The workers were wonderfully accommodating and helpful to a group that, by and large, had no experience with the technology.

With a business strategy that employs people who are otherwise often overlooked, mistreated, and generally excluded from the economy, Aki Energy is poised to strengthen the communities, economies, and environments in which it operates. As a local initiative, led by the two reserves, it is also an example of a story far too often overlooked in Canadian media and discourse: that reserves are places of innovation, generosity, energy and pride.

Christopher Thomas is Communications Assistant and CreateAction participant in the Winnipeg office of the Canadian CED Network.  Reach him at c.thomas (at) ccednet-rcdec.ca

This post is one of several CCEDNet will be doing to profile how social enterprises contribute to strong and inclusive communities in preparation for the Social Enterprise World Forum, October 2-4, in Calgary.  Join us there!