A new construction project in urban East Baltimore aims to use federal funding to achieve a number of progressive goals. Volunteers of America Chesapeake has leased space to Arcturus Growthstar Technologies, which received funding from CBO Financial to build indoor vertical farming facilities that will employ and train ex-offenders.

The East Baltimore partnership is funded through the New Market Tax Credit, a $65 billion program designed specifically for community development entities like CBO. It allows investors to claim tax credit in return for providing equity to a project, from which they later hope to realize profit.

The building being leased from Volunteers of America Chesapeake is currently a residential reentry center for ex-offenders, who often struggle to rejoin society and the workforce after leaving prison. Training and employment have repeatedly shown to be crucial for rehabilitating ex-offenders, and the United States’ work and training programs for inmates are sadly lacking compared to both other countries’ programs and the actual need.

The benefits of providing employment and training to ex-offenders are twofold: They help people stay out of prison and they promote economic growth. A 2013 study by the National Career Development Association found, “Employment is still a leading factor in recidivism for ex-offenders. Research indicates that an estimated 54 percent of offenders return to prison without full-time employment, compared to 14 percent who are employed full-time.” The Center for American Progress claimed that “estimates put the cost of employment losses among people with criminal records at as much as $65 billion per year in terms of gross domestic product.” 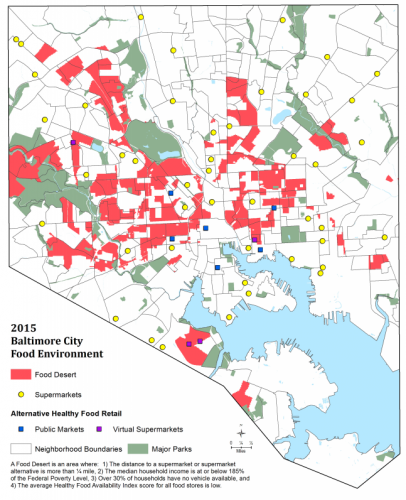 The East Baltimore project will help ex-offenders reenter society, and it will help revitalize the community by putting a gardening center right in the city. Urban farming projects have significant economic and health benefits for the surrounding communities and can even help promote socialization and self-reliance among participants.

Vertical farming, which is the urban gardening type proposed by Arcturus, has its advocates and its opponents, but it’s an undeniably interesting invention. The idea is to stack trays of plants with their roots in nutrient-enhanced water so more food can be grown in less space—like a skyscraper of greenery. The ability to grow large amounts of food indoors eliminates the problems associated with trucking produce into urban spaces, whose residents often don’t have access to fresh vegetables.

Baltimore in particular has struggled with this “food desert” problem, but Arcturus hopes that their project “could serve as a bellwether for other public-private partnerships within the urban farming industry.”

The public-private nature of the enterprise could be a blessing or a curse. On the one hand, the New Market Tax Credit is essential to the project’s existence. There is even an opportunity for further partnership down the line with the Work Opportunity Tax Credit, which offers significant credits to employers who hire ex-felons. (The WOTC covers a number of disadvantaged groups, including veterans and SNAP recipients.)

On the other hand, public-private partnerships sometimes demand short-term results and are answerable to taxpayers as well as private investors. Not only that, but federal money for social impact projects, especially those that impact ex-felons, may not be long for this world once the new administration takes over.

Nonprofits should keep an eye on the partnerships like the one in East Baltimore; if it’s ultimately able to achieve its goals, it may serve as a model for community investment projects elsewhere.

This article was originally published by NPQ online, on January 6th, 2016. Reposted here with permission.

Erin Rubin is the Editorial Coordinator & Community Builder at the Nonprofit Quarterly. Previously, she worked as an administrator at Harvard Business School and as an editorial project manager at Pearson Education, where she helped develop a digital resource library for remedial learners. Erin has also worked with David R. Godine, Publishers, and the Association of Literary Scholars, Critics, & Writers. As a member of the TEDxBeaconStreet organizing team, she works to communicate innovative ideas and translate them into action.