The cooperative enterprise model is seeing a renaissance around the world. The turnover of the largest 300 cooperatives in the world over the last 3 years has grown by 11.6 per cent to reach 2.2 trillion USD in 2012. Preliminary data from 76 countries points to more than 250 million people working in co-operatives. The International Co-operative Alliance recently postulated that cooperatives would be the fastest growing form of enterprise by 2020.

This is an ambitious goal, even taking into account the momentum of the cooperative movement in the aftermath of the crisis and following the 2012 UN International Year of Cooperatives. Their continued appeal in follow up to the global ‘great recession’ suggests it might not be off target.

During the recent and persisting economic crisis, the cooperative model proved its value time and again as a resilient business model. For workers of conventional businesses which were failing, cooperatives offered a socially, as well as economically viable alternative.  Empresas recuperadas (reconverted enterprises) in Argentina are just one example of firms where workers were able to save their jobs by taking ownership of the companies they worked for.

Looking ahead and considering some of the pervasive drivers of change which will shape the future world of work, the cooperative model looks well placed. It’s clear, for example, that the cooperative principles are well in tune with the spirit of peer-to-peer networking which has become such a core feature of the knowledge economy. In fact, LSE economist Robin Murray has argued that this is precisely where cooperatives flourish best. 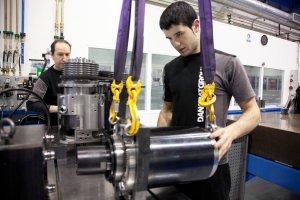 The Danobat Group in Spain, which makes

chip-removing machine tools, has thrived by

putting ownership in the hands of workers.

“Front line workers and plant managers have been given greater autonomy … work is being organized in teams and around projects. Projects draw in other firms in webs of collaboration. The capacity to co-operate, within firms and between them, is becoming more important than the principle of obedience,” Murray says.

Avanto Helsinki, a cooperative founded by university students in Finland, is an example of young people establishing cooperatives following such principles. Avanto is a “think-and-do-tank” offering participatory research, PR and communication services to companies, organizations and the public sector.  The cooperative model was seen by the young entrepreneurs as a low-risk start sharing both risk and responsibility.  It also offered a democratic (one member one vote) way to organize the day-to-day running of business, in addition to having fun with a group of likeminded peers.

Cooperatives have made some of their greatest strides in the green economy. In the renewable energy industry, for example, a recent ILO report found that they have a number of competitive advantages, including democratic local control over energy production and use, the capacity to create local employment, and reasonable pricing. Cooperatives could play a major role in achieving the goal of ‘energy for all’ – the drive to bring clean, modern energy to the 1.3 billion people in developing countries without access to electricity

Cooperatives have shown innovative flair in sectors such as social care, where there are widening  gaps between what communities need and what governments can provide.

Cooperatives have shown equally innovative flair in traditional sectors such as social care, where the  gaps between what communities need and what the government can provide are widening. Driven by global demographic changes, jobs in provision of care services are projected to be some of the fastest growing segments of the labour market. Cooperatives in Italy, for example, have expanded to the point of providing a wide range of services, from day-care for children to home-care for the elderly.

It’s said that need is the mother of invention. Cooperatives have historically emerged out of the need to provide goods and services not available from the public sector and conventional businesses. As such needs expand and become increasingly complex, cooperatives will find more and more space to meet them, advancing social conclusion and creating jobs for the future in the process.

Originally published by the ILO Blog on February 18, 2015

Simel Esim is a political economist, working in social and economic development for the past 20 years. She is the Head of the Cooperatives Unit at the International Labour Organization in Geneva. From 2004 to 2012, she was a Senior Regional Technical Specialist in the ILO Regional Office for Arab States, based in Beirut, Lebanon. Prior to the ILO, she worked in the International Center for Research on Women, Development Alternatives, Inc. and the World Bank.