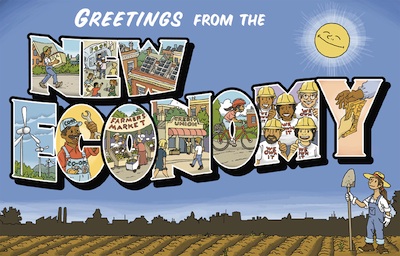 At their last meeting, CCEDNet’s Board of Directors approved a motion to join the New Economy Coalition.

The New Economy Coalition was launched earlier this year by a merger of the New Economics Institute and the New Economy Network.  It is a network of individuals and organizations collaborating within a shared framework of economic justice and environmental sustainability.

Although primarily US-based, the New Economy Coalition reflects a broader movement for economic change that offers significant promise for Canada as well.  CCEDNet’s strategic planning process last year concluded that, in order to achieve our vision of sustainable and inclusive communities, we need to embed CED in a wider economic paradigm that is part of a movement supported by a broad base of citizens committed to transformative political and economic change.  Building on the progress made at the National Summit on a People-Centred Economy, the New Economy Coalition does exactly that.

We hope you will join us in person or on-line to hear Bob Massie, President and CEO of the New Economy Coalition, speak during the CCEDNet reception at the Social Enterprise World Forum on October 2.  He will share insights into the growing New Economy movement in the U.S. and strategies for transformative economic change.

CCEDNet looks forward to working with our new partners in shared action towards a just and sustainable economy.  Join us!

STATEMENT OF MISSION AND VALUES

Toward an economy that sustains people and the planet

The mission of the New Economy Coalition (NEC) is to support a transition to a new economy where people and planet are the priorities; social justice and cohesion are prized; and peace, communities, democracy, and nature all flourish.

Many environmental problems are reaching crisis level, including climate disruption, the loss of forests and biological diversity, declining water and soil resources, and pervasive environmental toxins.

Meanwhile, current levels of economic inequality and insecurity, in the United States and elsewhere, are abysmal and rapidly getting worse.  These conditions are tightly linked: current economic norms, structures, and polices exacerbate the gap between rich and poor and simultaneously hasten the demise of natural ecosystems.

In the search for solutions to these huge challenges, many of us have come to realize that we cannot achieve shared prosperity or environmental sustainability without systemic changes in our economy and our politics.  Our current political economy is not delivering.  Something new is required.

We believe it is possible to usher in a new economy.  Some of the needed answers are already available, many others can be found.  The same can be said for initiatives needed to reclaim American democracy.  But policy and other solutions are meaningless without the will and capacity to implement them.  Our nation can realize an equitable and ecologically balanced future and embrace a new economic paradigm, but only if we build a movement supported by a broad base of citizens committed to transformative political and economic change.

NEC is a network of individuals and organizations interacting and collaborating within a broad framework of shared objectives. It is an ecumenical endeavor open to many perspectives and ideas. We are oriented toward finding solutions. What brings us together and defines our activities as a group is our shared commitment to collaborative action, systemic change, diversity of perspective, and mutual learning.

Many individuals and organizations are currently working on aspects of a new economy which, unlike the present economy, gives true priority to restoring and sustaining people, place and planet, including: the objectives and the values to which such an economy should be dedicated, the principles on which it should operate, the metrics by which it should be measured, and the steps needed to move in these directions. But current efforts remain small fragmented, and outside the mainstream of public discourse. Too often, innovative solutions and alternatives to the status quo are isolated or marginalized.

A creative fusion of people and institutions, ideas and action offers tremendous potential to shape a new, vastly improved economic ecosystem and associated public policy. Making this happen will be the work of the New Economy Coalition.

Specifically, The New Economy Coalition will:

As an organization, NEC will serve as a clearinghouse, capacity builder, and catalyst of its members’ efforts. NEC is not intended to replace or duplicate the work of its members but provide a supportive forum for common discussion, joint action, and collective impact. At a key moment in the nation and the planet’s history, NEC will serve its members and the community by helping to link and align work toward transformational change.