Building a 21st century economy is not an easy endeavour by any means. That said, we’re at an interesting point in history where the decisions we make today, will have long standing effects on the generations to come.

To date, we (in Canada) have lived in a world of abundance. Our economy has grown steadily, our ability to access the goods and services we need have been available to us, and we’ve enjoyed relative calm, compared to much of the world. Canada has largely stayed hidden from view, and we have been looked upon as both friendly and welcoming.

Canada has changed in recent years however, as has the world. Countries which were once considered “’Third World” now garner considerable attention on the world stage, traditional centres of power are changing, Canada’s position in the world has changed, and our values, goals, and aspirations have changed; some by choice, others through necessity or circumstance.

While the world has evolved and become increasingly interconnected in many ways, it has grown apart in many others. Income inequality has topped the charts, and new threats (such as climate change) threaten our very existence. We now stand on the edge of a divide, with traditional values, methods, theories and approaches on one side, and new, changing, and innovative ideas on the other. Will we move away from fossil fuels (because the burning of them is changing our atmosphere), or will we shift to solar, wind, geothermal, and other sources of clean energy and technology?

On a global level, we’ve got hard choices to make. Today, 1.1 billion people continue to live on less than one dollar a day, and the majority of the world’s inhabitants continue to struggle. Despite broad sweeping economic policy reform, free trade agreements, and the opening up of the world’s economies, wealth has become increasingly consolidated, rather than distributed, as notions of trickle-down theories falsely promised. Instead of seeing economic gain, workers, labourers, and farmers find themselves stuck, with little opportunity for advancement or change.

Governments at all levels absolutely have a role to play, as they have the ability to put in place protections and systems that can enable all of us. But in many cases government, international accords and agreements, corporate structure, and trade policies, have locked us into a world that is difficult to change. 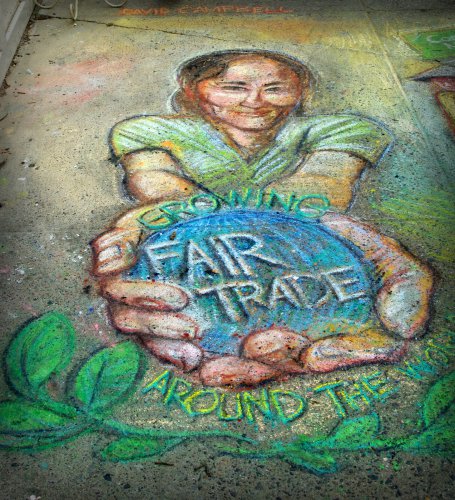 We can circumvent these barriers however, by building alternative economies. Each of us chooses what type of world we want to live in, through what we buy and where we invest. Choosing one banana over another, or one bag of coffee over another, can in fact restructure the system from the ground up. Buying from a better business, who sources and sells fair trade, means shifting revenue from a system which is exploitative, to one that is empowering; if everyone made that choice, change would unfold rapidly. Similarly, if everyone looked at where their investments sit, and made the choice to pull them out of oil, and put them into solar or wind, we would see a drastic shift in priority, and wealth.

Public institutions such as municipalities and universities are at the forefront of this shift. Both are in touch with their constituents, and are accountable to them. They are being bold, challenging traditional norms, and setting the ground-work for new economies. When a university (such as UBC is close to doing) divests its 1.3 billion dollar endowment fund and shifts it to cleaner energy and other areas of focus; that shocks the system, the market, and the economy. When a city commits to becoming Fair Trade Designated, it commits to sourcing and selling fair trade coffee, tea, and sugar that have come from better sources that empower rather than exploit, redirecting considerable flows of money, which again, changes the system.

Our cities and communities in Canada are now at the forefront, investing in the future, rather than in the past. They are becoming more liveable, more enjoyable, and more community-oriented spaces. They are leading globally through activities such as ethical procurement, investment in clean energy and technology, alternative transportations from bikes to transit, recycling, and divestment.

We’re at both a scary time and an exciting time. There is doom and gloom, and there is also incredible promise. Our cities are leading the way, and will continue to do so, if each of us ensures that they do. The action of choosing fair trade items is simple, but important. The values and impacts run deep, and are part of something much larger.

Sean McHugh is the founder and Executive Director of the Canadian Fair Trade Network (CFTN). Since 2009, he has worked with Fair Trade Vancouver, helping the municipality become Canada’s 11th Fair Trade City in May 2010. Sean also worked to support the University of British Columbia and Simon Fraser University in becoming Canada’s first