This week I was fortunate to attend the Tamarack Institute’s Community: Programs and Policies event that took place in Kitchener, Ontario.

Tamarack’s President, Paul Born, who helped co-found CCEDNet 15 years ago, has been described by Frances Wesley as Canada’s leading community organizer. So the stellar lineup of speakers he was able to gather should not have been a surprise. But it was a tremendous opportunity to have people like John McKnight, Peter Block, Sherri Torjman, Al Etmanski, Vickie Cammack and Paul himself together in one space with 150 participants for four days of learning. 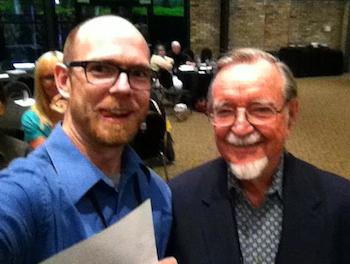 I am a bit embarrassed to confess that despite asset-based community development being such an important foundation of CED, I had never before heard John McKnight speak in person. He is clearly a treasure and reminded me in many ways of CCEDNet’s own eminent American luminary, Stewart Perry. John’s talk on the opening morning emphasized how local action is the foundation of community and democracy – the most concrete way that people can improve their daily lives. He reminded us that a huge set of invisible possibilities exist in every neighbourhood waiting to be creatively discovered.

One possibility I never imagined was getting to sing Bruce Springsteen with John, under the direction of Choir!Choir!Choir! later that afternoon.

Peter Block challenged participants to decommodify labour and reclaim the commons. Community building is not valued today because its impacts cannot be easily monetized, so the way we vote with our dollars becomes all the more important, creating a ‘conscious economics’ where people understand the impact of their spending.

Sherri Torjman, another founding member of CCEDNet and one of Canada’s leading social policy analysts, did a marvellous job of clarifying how policies and programs can encourage or inhibit positive shifts in behaviour. There were many municipal government employees at the conference, who shared valuable insight on some of the areas where municipal governments have more or less flexibility, and what strategic roles governments can play to frame issues in ways that foster local engagement.

A recurring theme throughout the conference was the need to resist the pull towards big systems, big institutions, and centralization. John identifies six unique functions that neighbourhoods provide better than services that can be bought or provided by institutions:

John outlines these in greater detail in his book The Abundant Community. The push back from centralization reminded me of the good work being done in the UK by Locality with their Local By Default campaign.

The last point I’ll make is one that was prominent here and has been consistent through my time at CCEDNet and even back to my days studying social work: it’s all about relationships. Whether it’s the increasingly blurred boundaries between social, economic and environmental priorities, or the personal neighbourhood connections that are the foundation for healthy, strong and inclusive communities, relationships are the new frontier of the living system era that is emerging in our 21st century. Fortunately, events like this help us to re-connect with old friends and make new ones. Thanks to Paul and his team at Tamarack for their great work.

Michael Toye is the Executive Director of the Canadian CED Network, having worked in various other capacities with CCEDNet since 2000. Michael has also taught courses on CED and social enterprise at Concordia University and has written a number of articles and other publications on CED and the social economy, including co-editing the book, Community Economic Development: Building for Social Change.