I spent a few months this year working with the Social Trade Organization (STRO) based in Utrecht, The Netherlands, an innovator in the field of complementary and digital currencies.  STRO was launching a new platform for its digital payment system and starting a large, EU funded project with partners in Bristol, Sardinia and Barcelona.  I wanted to know these projects and to better understand STRO’s methodologies and technology for creating regional C3s – commercial credit circuits.  Also, a big bitcoin conference was to take place in Amsterdam in May and I wanted to go to that to extend my knowledge of digital decentralized currencies.

The Bitcoin Foundation conference was quite impressive featuring three dozen booths of various businesses busy in the ‘bitcoin ecosystem’ with 1100 attendees and participants from around the world, a bevy of legal experts on the subject and practitioners and ‘ambassadors’ from several continents.  Investors at a panel on investment revealed that between the three of them would invest over $100 million in bitcoin itself and in the businesses around it over the coming two years.  That’s a lot of faith and will at work in the ‘bitcoin space’.  What’s at stake?  Why the enthusiasm? 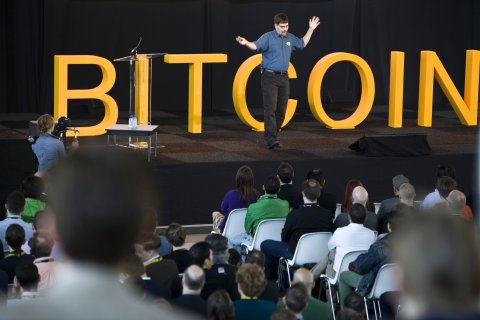 There have been hundreds if not thousands of groups that have used monetary-type tools in their communities, many that have come and gone.  There are also dozens of private or commercial business-to-business barter systems that tend to be larger and more sustained.  It turns out it’s not that easy to make local currencies operat7 to use as a medium of exchange though accepted by handfuls of businesses as money.  It’s highly liquid and has become a speculator’s sport.  I am still astounded at how a new currency with uniquely digital features can be conjured up out of thin air and attract millions of dollars and followers to it.

At one booth I found out that there are about 350 cryptocurrencies in existence of which bitcoin was the biggest.  This particular business offered mining services in these various cryptocurrencies.  So you pay Canadian dollars or other national currency in order to be able to earn cryptocurrency as a miner.  Other fascinating businesses included exchange interfaces for trading in cryptocurrencies, ATMs for bitcoins, security service for bitcoin wallets and bitcoin transmission services.  If money is not neutral, as I heard at the bitcoin conference and as I have heard at complementary currency conferences, neither are the people who are attracted to them.  I found a couple of community-oriented people but by and large it seemed this was a libertarian crowd.  Some people I chatted with at the conference were excited about getting away from governments and from having to pay taxes.  They were also excited about not paying exorbitant fees for transactions charged by credit card companies and money transmitters – ok, that I got.  Others saw a potential for financial inclusion and for lifting people out of poverty.  I thought that was a lot of hope for what is at the moment an asset that must be bought and sold with national currency (for most ordinary people anyways), whose value is volatile and based only on demand for it.  But who knows if things keep developing.  Meanwhile, I’ll keep my feet relatively on the ground and work within the complementary currency field.

The Social Trade Organization where I worked for several months is a trail blazer in the complementary currency field.  STRO has been working 20 years in the field of monetary type tools for sustainable community-based development and economies.  Many of their projects have been in Latin America – they have offices in Uruguay and Brazil – and are considered part of a solidarity or social economy as well as the wider economy.  Their commitment includes developing a banking quality payment system software, Cyclos that any group can license at low cost or use a community version for free.  STRO won the E-pay Innovation Award supported by the Bill and Melinda Gates Foundation at the Electronic Transactions Association conference in April for Cyclos.  Cyclos is used by over a hundred groups around the world ranging from small local groups to commercial businesses. 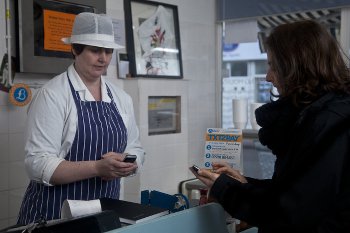 With Europe in the throes of a prolonged recession, a number of communities are using Cyclos to run local barter exchanges.  A local group of residents in Volos, Greece received media attention when they launched their exchange a few years ago running the administration of their system using Cyclos.  The small business members of Sardex in Sardinia do over a million euro a month in trade with each other using Cyclos.  STRO is leading a multi-partner E