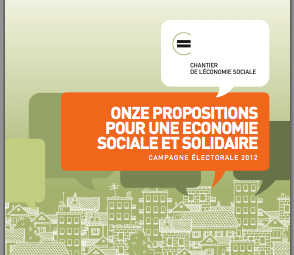 During Québec’s provincial election campaign, the Chantier de l’économie sociale has asked political parties to confirm their commitments and positions on the social economy.  Specifically, the Chantier has asked them to respond to eleven proposals, taken from the document Pour un changement de logique économique.  Their answers will be shared with all the Chantier’s members and social economy partners in all regions of Québec during the election campaign.

The proposals contained in the document « Onze propositions pour une économie sociale et solidaire » represent a synthesis of documents assembled by the Chantier from several sources.  They reflect the concerns of social economy practitioners who are active in all regions of Québec and in numerous economic sectors.  They build on a news-monitoring service carried out by the Chantier to identify projects underway in local communities throughout Québec and opportunities for the creation or expansion of collective enterprises.  Finally, these proposals also draw upon the experiences of other countries, especially those learned from the international monitoring carried out by RELIESS and those presented at the International Forum on the Social and Solidarity Economy (FIESS) which brought together social and solidarity economy and government representatives from 62 countries last October in Montréal.

The Chantier is convinced that Québec needs the strength of collective entrepreneurship and that it is essential for these issues to be discussed during the election campaign.