During the 1940s, we were promoting campaigns for the widespread use of chemical pesticides with jingles like “DDT is good for me!” and videos showing people literally eating DDT by the spoonful:

In retrospect, of course, we know that we messed up.  We messed up bad.  Yet we kept developing and distributing more and more chemicals, which often end up becoming harmful environmental contaminants. Why does it seem as though we have failed to learn our lesson time and time again?

Environmental contamination is often treated as a local issue; however, it is rarely such.  Many contaminants are subject to long-range environmental transport, either through the atmosphere or ocean currents.  Many persistent organic pollutants (POPs), like DDT for instance, will be transported from lower latitudes (i.e., the tropics) through a process referred to as the ‘grasshopper effect’, and are eventually deposited in the Arctic, where they remain. Watch video

Many of these POPs are highly toxic and bioaccumulative, and will build up in very high concentrations within the fatty tissues of high trophic level organisms (i.e., near the top of the food web).  Ultimately, this negatively impacts the health of northern populations who often depend on these animals as part of their diet.  The big picture here is that when a chemical is manufactured or released, say, in North America, natural Earth processes will take what is temporarily a local issue, and distribute it such that environmental contamination becomes a much bigger global problem.

Contaminants can end up in northern, Arctic cities where the concept of a ‘city’ itself is quite different from that elsewhere in the world.  In Arctic communities, hunting remains very important and crucial for families’ well being.  Often consuming animals with extremely high contaminant concentrations may impact northern cities more so than other urban cities where contaminants may not accumulate as much.

Let’s think about a contaminant like DDT.  DDT was believed to be completely safe for widespread use.  It was even sprayed over family picnics and rubbed in children’s hair to show that there were no immediate toxic effects. 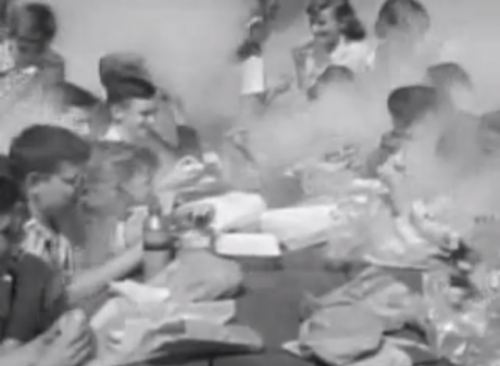 Fast forward a few years, when the long-term bioaccumulative and toxic effects of DDT become known.  Newer contaminants have followed in the same footsteps; ‘surprise’ adverse environmental and health effects become known after the chemical becomes environmentally ubiquitous – but the damage has already been done.

The development of new, anthropogenic (i.e., human-made) compounds focuses on practicality and usefulness in the market – and understandably so. But this process should always keep in mind the long-term impacts these compounds may have for the health of the environment and ecosystems (including human health).  This is a key element of new economies – designing chemicals with the health of the planet in mind, not just the benefits or convenience it will bring to its users.

Currently, the approach to regulating contaminants in Canada involves an initial universal screening process, assessing health and environmental safety.  Any modifications to a compound’s status are made if future research or events determine that it poses a threat to ecosystem health.  This has been flagged by some as a problem, as it is said to assume a ‘market now, study later’ approach.

Consumer education is important to consider in general, especially for terminology.  Notice how I refrain from using ‘toxin’ throughout.  That’s because it doesn’t mean what everyone seems to think it means.  Often times (I’d say about 99% of the time), people are actually referring to ‘toxicants’.  Toxins are of plant or animal origin (i.e., biological in nature), and is not the correct term for human-made contaminants – fun fact!

New economies must include a larger focus on holistic remediation efforts.  Remediation efforts usually focus on a few contaminants known to be present in a specific area.  Larger-scale remediation efforts should include a search for and cleanup of all contaminants of significant concern for ecosystem and human health, rather than only taking care of specific chemicals as prerequisites for a project or development. If done properly (e.g., on a municipal level), there can be a lot of success in widespread remediation, which would hopefully encourage chemists, engineers, toxicologists ecologists, and others with the tools to collaborate and invest efforts into large-scale remediation.  If remediation were done on municipal scales, with the appropriate funding, it could become much more efficient and tackle a large issue at once instead of breaking it down into smaller pieces, which does not always eliminate the full issue of environmental contamination.

We must keep in mind that localized decisions regarding environmental contaminants are sometimes necessary.  For instance, DDT continues to be used in tropical areas of the world where malaria persists.

It’s essentially a trade-off between reducing the chance of contracting a potentially deadly disease, or risking long-term adverse effects of a bioaccumulative, toxic compound.  Understandably, the choice between immediate well-being and potential long