Last week, CCEDNet members gathered in Winnipeg and on line to participate in the annual general meeting.

On the technological side, following our shift to the new Canadian Non-profit Corporations Act last year, members participating virtually were legally able to vote and be counted towards quorum.  This was a big change from the old law, under which virtual meetings and participation was not allowed.  So we were pleased to have members participating in person, in an English webinar and teleconference, and in a French webinar and teleconference, with simultaneous interpretation. 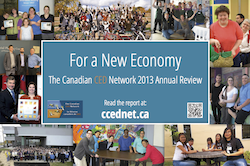 The AGM also launched CCEDNet’s first virtual annual report, making good use of the videos produced over the last year, and many photos collected through our ‘What is CED?’ photo contest.

It is also worth noting that the membership approved a special resolution to ask the Canadian government and all parties in the House of Commons to affirm the recommendations of the Royal Commission on Aboriginal Peoples concerning the ‘Doctrine of Discovery’ and ‘terra nullius’, and negotiate on an equal basis with Aboriginal peoples.

Finally, this was the first AGM led by our President, Diana Jedig, who got us through the agenda in record time!

The AGM was preceded by a very interesting CCEDNet-Manitoba spring members meeting, reviewing the last year’s accomplishments and setting next priorities.

Members welcomed Derek Pachal to the Board, and expressed gratitude to outgoing Board member Victoria Morris for her many years of tireless support.

Many thanks to the members who participated, the staff who organized the logistics, and to CCEDNet’s Board members who guide the Network throughout the year.