Skip to content
From the “Gift That Gives Twice”, to “Transforming Our City, One Purchase at a Time,” Local Investment Toward Employment (LITE) has a history of directing purchasing in Winnipeg in a way that has generated social value for the community while addressing community identified needs and goals. This has also impacted something that is absolutely essential to every social enterprise – access to a growing market in order to increase the scale of their social impact.

LITE was created in Winnipeg in 1994 with a very simple mission: To promote Community Economic Development (CED) by supporting inner-city initiatives in Winnipeg that build capacity and provide jobs. LITE is a public foundation that relies primarily on public and private donations.  Since its creation 20 years ago, LITE has raised over 1.4 million dollars toward sustainable CED initiatives, as part of a long-term poverty reduction strategy. 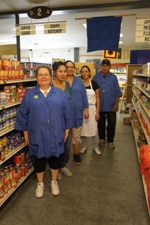 LITE’s origins are found in the flagship program – the Alternative Christmas Hamper Campaign. In 1994, it was noticed that at Christmas time, when most businesses are experiencing their highest sales of the year, inner city businesses were seeing sales drop. Winnipeggers were donating food to charitable Christmas hamper programs distributing food in the inner city, but this influx of goods meant that local residents did not need to buy food from the local businesses. The immediate problem of hunger was being solved, but businesses that employed local residents year round were under threat of closing. Neechi Foods Co-op Ltd, an Aboriginal worker owned grocery store was one business in particular that LITE was created to support. LITE founders believed that hamper donation dollars would be better spent if they could have a double effect: making hamper purchases within the inner city to support economic projects that would have positive benefits in these neighbourhoods long after the Christmas dinner is put away.  This program has now expanded and includes several other strategic purchasing partners designed to support even more inner city businesses and create more jobs.  In 2012-2013 LITE purchased $35,000 of food through the Alternative Christmas Hamper Campaign, supporting approximately 50 jobs in Winnipeg’s inner-city! 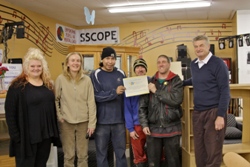 Recognizing that grants also effectively support employment and skill development, LITE began to invest strategically in programs that created training opportunities and jobs. In 2012-2013, LITE invested in 11 community organizations throughout Winnipeg’s inner city.  In total $46,390 was disbursed, contributing to over 350 employment and/or training opportunities for inner city residents in areas as diverse as child minding, sewing, catering, and construction. The programs all aim to support individuals living in the inner city who face multiple barriers to becoming employed or staying employed. They vary from providing short term employment experiences with more of a focus on building up confidence and self-worth, to longer term experiences that aim to get individuals work- ready and into a long term job by the end of the program. 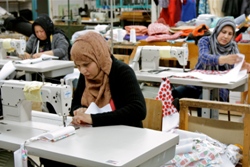 Seeking to strengthen its social purchasing stream of programming, LITE became home to the Social Purchasing Portal (SPP) in 2010. A model first developed in BC, this project stemmed out of a need identified by community members involved with the social enterprise sector for access to a wider market. The SPP was launched by SEED Winnipeg in 2004 before later finding a home at LITE. The SPP is an online networking and collaboration tool that strengthens businesses, the community, employment creation, and the local economy. The project consists of three main groups:

The SPP works to direct existing institutional and individual purchases toward our supplier partners in order to create local economic and social value. Currently, the project works with 41 suppliers, 60 institutional purchasers, and around 22 employment agencies. In our last reporting year, we were able to track over $697 000 in purchasing that has been intentionally directed to the socially minded and local enterprises of the SPP. In turn, these enterprises were able to have multiple social impacts in their communities, such as employment opportunities, poverty reduction, social inclusion and community economic development.

Here’s how Neechi Foods has appreciated LITE’s impact (from their website in 2010):

“A huge ‘thank you’ to the many volunteers and staff at LITE for helping sustain our business during difficult times in the 1990’s and for helping us to expand our business during the past decade. When we started 21 years ago sales were flat in December and we soon realized that this was directly related to the widespread distribution of Cheer Board hampers in our neighbourhood. Through direct purchases of groceries from Neechi for Cheer Board hampers and through public education about community economic development, LITE helped turn December into the strong retail month that it is elsewhere.”

There are many ways in which we can impact the climate in which social enterprises are working. LITE and the SPP showcase the multiplying effect a community can create by re-directing purchasing at both corporate and community levels.