The new provincial government has subtitled its budget documents with the phrase “Correcting the Course” and it has repeatedly stated its goal of making Manitoba the “Most Improved Province.” What will this new course mean for those working to create economic opportunities and improve social conditions for those most in need? Will this vision of improvement align with CCEDNet-Manitoba’s vision of reduced poverty, greater social inclusion, and equitable and sustainable local economies and communities? In some areas, it’s too soon to tell. At first glance, it appears that not a whole lot has changed in Budget 2016. But a careful look at some of the language in the throne speech, ministerial mandate letters, and budget reveals plenty.

Many of our Network’s policy priority areas that had been addressed by the previous government appear to be continuing under the new government. This includes:

However, the language used by the new government around our Network’s policy priorities related to child care, housing, and poverty suggests a change in course.

The Minister of Families has a mandate to re-invigorate investment in private sector child care spaces. This is in contrast to the approach that CCEDNet-Manitoba has called for which emphasizes strong public sector investment in quality and affordable not-for-profit child care.

Budget 2016 does not appear to provide new money for additional child care spaces, eliminate the $2 daily fee for low-income families, or support the child care workforce with additional training opportunities and a provincial wage scale – commitments made in January 2016 under the previous government as part of a plan to create a universally accessible child care system with 12,000 more spaces. The budget does provide a small increase to Early Learning and Child Care for ongoing operating grants to existing child care centres and for the principal and interest costs of new centres already built.

There are few details on the new government’s approach to housing. The Minister of Families has a mandate to foster community and private sector partnerships that promote home ownership opportunities for First Nations families. CCEDNet-Manitoba has worked with members to call for increasing the net supply of social, affordable, and co–operative housing, while promoting homeownership as only one piece of the housing continuum.

Budget 2016 provides an increase of $46 million to the Manitoba Housing and Renewal Corporation for “new housing construction, improvement and maintenance costs.” It’s unclear what exactly these additional dollars will be spent on. However, with increasing budget demands resulting from expiring federal subsidies and the principal and interest costs of recent new builds, it is difficult to imagine how this money could go toward new commitments. However, dollars for new housing commitments may soon be available if the new government can work out an agreement with the federal Liberal government for a share of the social infrastructure money contained in the federal budget. 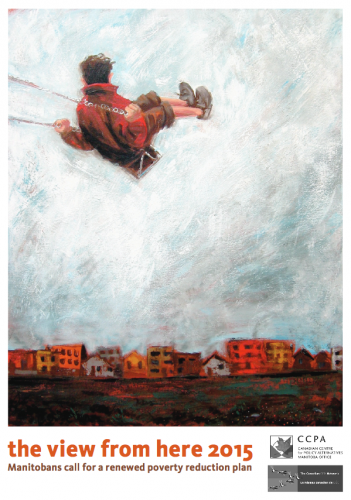 CCEDNet-Manitoba has worked with Make Poverty History Manitoba to call for a comprehensive poverty reduction plan with targets and timelines based on priorities outlined in The View From Here. The content within Budget Paper D – Reducing Poverty and Promoting Social Inclusion is not representative of a comprehensive plan, but notes that work will begin on the development of one in preparation for Budget 2017.

The paper notes how the budget ‘lay(s) the foundation for the development of a new approach to addressing poverty.’ This approach includes indexing the basic personal exemption to the rate of inflation to put more money in the hands of low-income Manitobans. Tax changes are the only new initiative offered in the very brief budget paper on poverty and have been presented to media as an alternative to increasing the minimum wage. However, the increase to the basic personal exemption only provides low-income earners with about $16 more annually — much less than the additional $400 or so that would come from an increase to the minimum wage based on inflation. This year would mark the first out of the last 17 without a minimum wage increase despite full-time minimum wage work still failing to bring Manitoba families above the poverty line.

The paper also notes that the new government’s poverty reduction plan will include social impact bonds, Urban Indigenous Economic Development Zones, and homeownership opportunities for First Nations and Metis families. Also noted, is the launch of a value for money review of government spending to free up more resources for front-line services including those that assist low-income Manitobans. CCEDNet-Manitoba will work with members to ensure that the new poverty reduction plan is comprehensive and recognizes the value of strong and stable community-based organizations working to reduce poverty.

The new government’s budget and mandate letters (Justice and Families) speak to reducing the recidivism rate and social problems through Social Impact Bonds (SIBs) intended to improve the outcomes of frontline social services. SIBs have been used in other jurisdictions to encourage non-government entities to finance the work of non-profits. If the non-profit achieves specific outcomes the government is expected to pay a return and potential profit to the investor. This model is one of several SIB models that the new government could