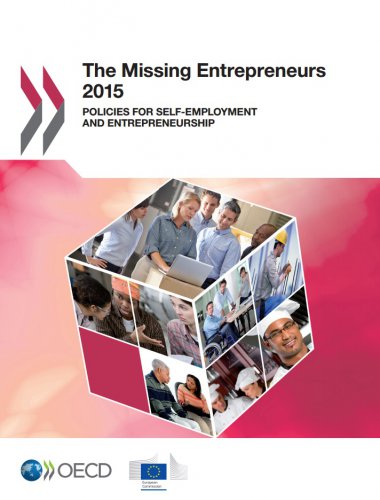 Encouraging entrepreneurship among disadvantaged groups can help boost jobs and tackle social exclusion, according to a new joint report by the OECD and European Commission.

The Missing Entrepreneurs 2015 looks at European entrepreneurship policies that contribute to social inclusion by providing opportunities to start and run businesses for those that are disadvantaged and under-represented among the self–employed. It focuses on support for youth, women, seniors, the unemployed, ethnic minorities, immigrants and people with disabilities.

The report looks at how to support business growth for entrepreneurs from these target groups by improving the quality of business start-ups and fostering entrepreneurial motivation. It says networks need to be developed to increase access to resources, such as financing, business partners, and ideas for new products, processes and organisational methods. It recommends that successful role models from the target groups are used to inspire other entrepreneurs.  At the same time, mainstream support programmes for business growth (e.g. access to finance, leadership and management training) need to be accessible to entrepreneurs from the disadvantaged groups.

According to a survey cited in the report, only 36% of young people and 33% of women in the European Union say they have the knowledge and skills to start a business. Coaching and mentoring programmes can improve entrepreneurial skills. But specific training is needed for coaches and mentors to ensure they understand the issues and challenges faced by entrepreneurs from the target groups. It is also important to match entrepreneurs to a coach or mentor using a clearly defined process that considers gender ethnicity, and business sector.

The report includes the following findings:

Other examples of effective approaches include the Innovative Youth Entrepreneurship in Greece, which provides grants of up to EUR 10 000 for innovative business start-ups to unemployed university graduates. The programme receives funding from the European Social Fund and only targets innovative business ideas to increase the chances of developing sustainable businesses.

In the United Kingdom, the 12/8 Group is a peer mentoring initiative for Afro-Caribbean business owners in the West Midlands region.

The Missing Entrepreneurs 2015 is divided into three sections. It provides data on the self-employment and business creation activities by each target group, and on the barriers that they face. It looks at supporting business growth by entrepreneurs from the target groups and effective coaching and mentoring. It also provides policy examples and country-specific data from each European Union country.

Further information is available at http://www.oecd.org/industry/inclusive-entrepreneurship.htm or from the OECD Media Division.