On November 2 & 3, Ryan Turnbull, Member of Parliament for Whitby, hosted the Sustainable Finance Forum on Parliament Hill, highlighting the opportunities and challenges to scale up social innovation and sustainable finance to create jobs, transition to net-zero, and build an inclusive economy.

The remarks below were made by Shannin Metatawabin, CEO of the National Aboriginal Capital Corporations Association as part of a panel discussion during the Forum on Indigenous Entrepreneurship and Reconciliation, moderated by Jaime Battiste, MP for Sydney—Victoria.

My name is Shannin Metatawabin from Fort Albany in Northern Ontario.  I want to thank the people of this territory for allowing us to have this meeting on their territory.

I want to tell you a little bit about the National Aboriginal Capital Corporations, but I want to build on what Jamie first started with is an Indigenous term that speaks to what we’re talking about today.

In the Cree worldview, Quatchee is the word that we use and it basically speaks to how the health of your neighbour determines the success of your future.  And I think it speaks highly to what we’re trying to talk about here with social impact investing, ensuring that we don’t forget people, ensuring that we’re inclusive of our society in general because the capitalist way of thinking is individualistic whereas our Indigenous world view is community, and we won’t be successful unless our community is successful.

Yesterday, I was able to participate in the first day of the Sustainable Finance Forum, and I spoke to some of the MPs and participants who didn’t know about our network, so I want to make sure that I’m comprehensive with letting you know that more than 35 years ago, the government had a great idea to be inclusive of Indigenous people:  to provide $240 million that has now been recycled 15 times in the last 35 years.

We have recently launched an Indigenous Growth Fund, and this is our tool to allow us to raise private sector capital to provide more capital into our network.

There’s about $350M in loan capital in our network that’s been recycled, and it’s been growing to $3.3 billion dollars in lending.  More than 50,000 loans have been provided throughout this network.  So it’s an infrastructure that’s sitting out in the ecosystem covering all parts of Canada that is deploying capital.

Now with the Indigenous Growth Fund, we’ve issued some loans to our members who are in turn providing that to the ecosystem, providing more business. For every loan provided, 72% increase in life satisfaction is experienced by that entrepreneur.  A 52% increase in mental health indicators, and 20 percent increase in health indicators.  Why I mention that is because these are real social impacts.  Those are cost savings to Canada, and social spend;  it’s increasing own source revenues for communities – it’s impacting every community at every level.

Shannin is Cree/Inninow from Fort Albany First Nation of the Mushkegowuk Nation. He holds a Bachelor of Arts in political science from Carleton University and an Aboriginal Economic Development certificate from the University of Waterloo. He previously served as the Executive Director of the Ontario First Nations Technical Services Corporation and the Manager of Aboriginal Affairs and Sustainability with De Beers Canada. 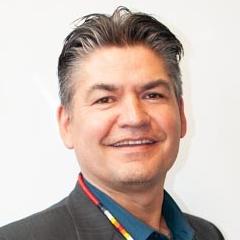