CCEDNet member Roger Peters is an engineer and policy analyst with over 40 years experience in co-operatives, clean energy, and local economic development. He is a founding member of the Ottawa Renewable Energy and CoEnergy Ontario Co-operatives.

The virtual shut down of the World’s economies as a result of COVID-19 has exposed their fragility and accentuated their inequality. Our current reliance on conventional business models is not working. As we re-build, we should not bail out large corporations, but rather create more resilient and equitable local economies.

COVID-19 has also shown us how much we rely on the supply of goods and services from outside our community.  The world economy has become precarious too – products we buy usually contain parts made in many different countries. This may have been more efficient for corporations in pre-COVID 19 times, but it is not resilient enough in a world that will see more pandemics and changing climate. Local communities need to have more say in what is made in their economy and how the rewards are shared. Municipalities must be able to influence local job creation and ownership through their procurement and urban development policies.

Worker or employee co-operatives have existed for many years and have been shown to be more resilient than conventional businesses in times of crisis.  The reason for this is that in a worker co-operative everyone has a financial stake in the enterprise, shares in its success, and equitably manages its failures. It is rooted in the community. In a conventional business, employees are an expense and profits for investors are paramount.

The time is also right for rebuilding a more democratic business model. Many small business owners may not want or be able to restart their businesses after COVID 19. Many baby boomers who own businesses are ready to retire (the so called “silver tsunami”). There is a real interest and opportunity to save these companies by selling them to those who work for them. Many Canadians are also wanting to have more say in their work lives. 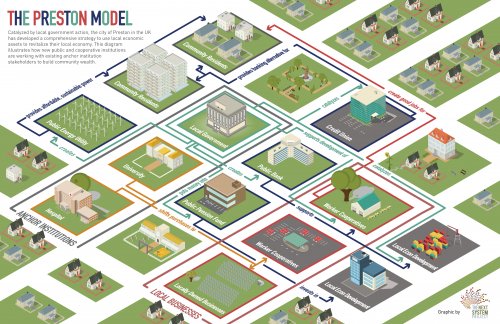 Cities are taking control of their economies

Cities around the world have started to see local procurement and worker co-operatives as keys to more permanent and equitable economic development, taking things into their own hands rather than relying on outside investment to provide jobs.

Two cities on opposite sides of the Atlantic were the first to see local procurement and employee cooperatives as keys to their economic future – Cleveland, Ohio in the United States and Preston, Lancashire in the United Kingdom.

In 2008, the City of Cleveland joined with several other local “anchor” institutions (including the Cleveland Foundation, the Cleveland Clinic, University Hospitals, and Case Western Reserve University) to found the Evergreen Cooperative Initiative to create living-wage jobs in six low-income neighborhoods. The initiative focuses on building a local economy from the ground up rather than a trickle-down strategy from outside investment.

The anchor institutions agreed to use their significant procurement power to purchase more goods and services locally. This both keeps money in the community and builds secure good quality local jobs. The Evergreen Co-operative Initiative supports new employee owned worker co-operatives and acquires and converts conventional business into worker co-ops that can provide the goods and services required by the anchors.  Evergreen Co-operatives now employ more than 250 people at three core businesses: an industrial laundry, an urban greenhouse, and an energy-efficiency contractor. A Fund for Employee Ownership has been set up to help acquire businesses that wish to convert to a worker co-operative and to help to develop new co-ops – particularly small businesses owned by “baby boomers” wishing to retire.

Over in Preston, UK, the local council was faced with a dilemma when a large development project in the centre of the city fell through in 2011. Following Cleveland’s example, they persuaded the local university and other anchor institutions to begin procuring goods and services from local sources. Using what is now called “the Preston Model” in just 5 years Preston has become the most improved city in the UK according to the Good Growth Index.

They also set up The Preston Co-operative Development Network (PCDN) to develop and support local employee owned enterprises which was modelled on the very successful support network for employee owned producer co-operatives in Mondragon, Spain.
Rather than acquiring business like Evergreen, the PDCN assists conventional business convert to independent employee co-operatives and helps to establish new ones to fill the gaps in anchor institution procurement needs. Like Mondragon, the network includes several key support functions – education (training of potential co-op employees), R&D (to identify new opportunities), and financial (to finance co-op conversion and development).

Other cities are following Cleveland’s and Preston’s lead.

Promoting and supporting local procurement and employee ownership through the Cleveland and Preston models are key elements of what is known as Community Wealth Building.  This new model of democratic economic development seeks to give local institutions and citizens more control over their economy and workplaces and keep more of the generated wealth in the community. This means supporting, for example, municipal ownership of services, social procurement strategies, land trusts for affordable housing, worker co-operatives, credit unions, and local training and apprenticeships. As well as using direct support, some cities are requiring that new developments meet certain targets for community wealth building through Community Benefit Agreements.

The term social procurement refers to procurement from social enterprises, which are defined as those that have an embedded mission to achieve social, cultural or environmental aims and use at least 50% of profits to further this mission. Cities are beginning to incorporate social procurement into their overall procurement strategies. 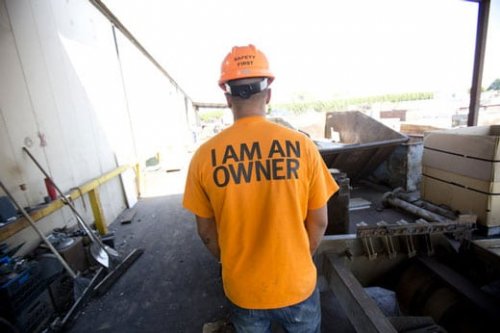 Several EU countries, including Spain, Italy and France have “