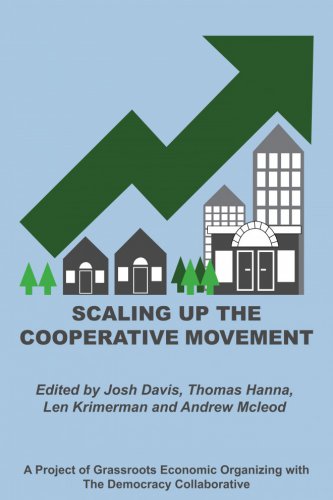 How can we scale up the cooperative movement without losing our cooperative values?  That is the question contributors seek to answer in this collection of essays.

In the years since the financial crisis and Great Recession of the late 2000s, growing numbers of people in the United States have come to the realization that the current economic and political system is profoundly dysfunctional. Public concern continues to grow over increasing disparities of wealth and income, deteriorating social and environmental outcomes, and the dangers of vesting power in large hierarchical organizations – whether private corporations or government agencies. Moreover, with stalemate in the political process continuing unabated and traditional solutions seemingly blocked at every turn, new approaches are becoming increasingly attractive.

But while public sentiment may be more amenable to contemplating fundamental political economic changes than in the recent past, the fact remains that the opportunity has yet to be fully seized. Specifically, the cooperative sector, which forms a basis for many visions of a more just, egalitarian, and sustainable society, remains quite small – vanishingly so when considered in relation to the corporate-dominated economy as a whole. Despite the boost that economic inequality issues received as a result of the Occupy movement and its offspring, that energy has seemingly not, as of yet, been translated into the widespread creation or strengthening of co-operative enterprises.

Moreover, recent events elsewhere in the world have demonstrated that even when cooperatives and cooperative networks reach a larger scale, significant challenges remain. For example, Fagor Electrodomésticos was, until recently, one of the largest appliance manufacturers in Europe: part of Spain’s Mondragon Corporation, a group of 289 worker cooperatives and businesses employing over 80,000 people. Because of its high profile, Fagor’s recent bankruptcy has been the occasion for a good deal of self-analysis, criticism and soul-searching on the part of the cooperative community. Meanwhile, the UK’s Co-operative Group continues to struggle through a series of crises that has already cost it control of its bank and forced it to sell off numerous assets. It faces a debt load that may threaten the existence of the massive co-op that is the direct descendent of the original Rochdale Pioneers.

There has, therefore, never been a better time in recent history for activists, organizers, practitioners, and scholars to present and discuss alternatives to the current system as well as the challenges facing the cooperative movement as it considers its role in such potential alternatives. This book Scaling Up the Cooperative Movement is a contribution to the ongoing discussion. The included articles are part of an online theme that was originally complied by Grassroots Economic Organizing (GEO). The whole series can be found on the GEO website. Several of the articles were published elsewhere prior to their appearance in the GEO series and this book.