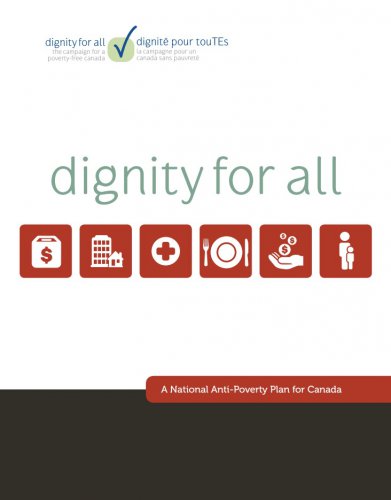 It’s time for a plan to end poverty in Canada. In a country as wealthy as ours, 4.8 million people struggle to make ends meet: to pay their rent, feed their families, and address basic needs. Today, Dignity for All, a collaborative campaign between Citizens for Public Justice and Canada Without Poverty, released their much-anticipated National Anti-Poverty Plan for Canada.

“Over the past five years, Dignity for All has received support and input from thousands of people in Canada,” said Joe Gunn, Executive Director of Citizens for Public Justice. “We are very excited by the amazing reception this report has received from representatives from all parties. The collaborative process in which the National Anti-Poverty Plan for Canada was drafted has made it clear that we have the political will to take action on poverty in Canada. And now we also have a plan. The time to act is now,” said Gunn.

Over the past 5 years, Dignity for All has garnered support from 15,000 people in Canada who believe it is time for the Federal Government to step up and take responsibility for this country’s impoverished populations. It is time for Parliament to act. Our plan puts this in motion.

“It is never acceptable for a rich country to do nothing about poverty, and now is certainly not the time,” said Leilani Farha, Canada Without Poverty’s Executive Director. “The rights of 4.8 million people are being violated and yet the Federal Government hardly seems concerned. Our plan lays out the framework for a successful national anti-poverty plan.”