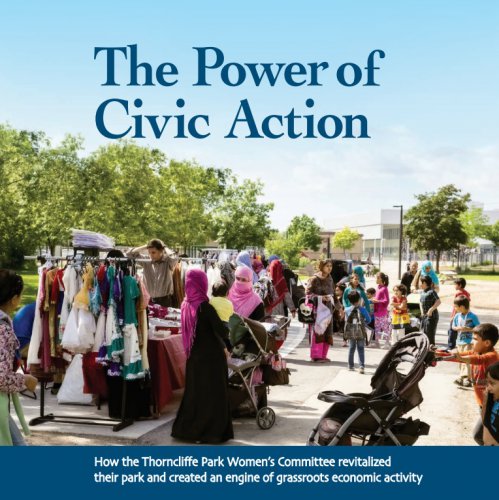 Toronto’s neighbourhood of Thorncliffe Park, built in the 1960s, was designed for 12,000 people — young singles and couples with cars to traverse bridges into the city. But by 2008, Thorncliffe Park’s demographic had changed. Its aging apartment buildings had become an “arrival city” for newcomer families and the neighbourhood housed a population of close to 34,000. Few in the low-income neighbourhood had cars and there was no square or commercial main street where residents could meet and socialize. What it did have was a tiny park, albeit quite rundown.

In the summer of 2008, a group of women who met in the park came to realize they shared a desire to strengthen their neighbourhood and their community. Despite having little money, no political clout, and no business connections, the group — who would come to call themselves the Thorncliffe Park Women’s Committee — persevered. Their willingness to forge partnerships, their commitment to volunteering, and their ability to harness their collective power to get things done proved to be an extraordinary example of the power of civic action.

Over the next few years the Women’s Committee helped improve the quality of green space in the park and increased accessibility to recreational opportunities. Through local celebrations and grassroots programming, including a weekly summer bazaar, food market, and activities for children, they created an engine of economic, environmental, and social activity in Thorncliffe Park.

The Power of Civic Action tells how the Women’s Committee became empowered to create change for themselves and their community, overcame numerous obstacles to revitalize their park and neighbourhood, and, in turn, changed practice and policy across the city. As Sabina Ali, Chair of the Thorncliffe Park Women’s Committee says, “Profound positive change can happen when people with passion and dedication come together with the goal of improving their community.” No small feat for a group of local residents who met, by chance, in their neighbourhood park.

After and before: a snapshot of revitalization
Social connection becomes community power
Bridging ambition and social capital
Informal no more
Respecting the rules and gaining respect
Sourcing the ingredients for a strong future
The power of small
From a bench to a bazaar to inclusive city building