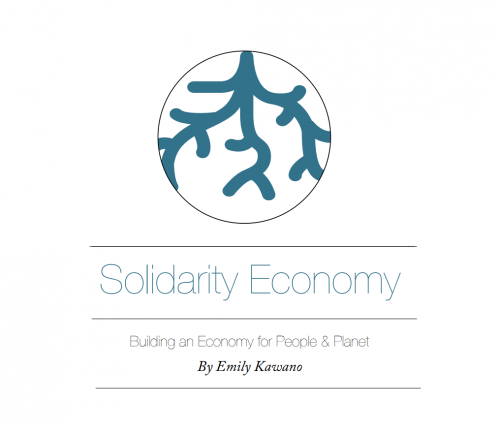 We stand at the brink of disaster. The fragilities of the 2008 global economic meltdown remain, prompting warnings of another financial collapse from the likes of billionaire financier George Soros and the International Monetary Fund. Inequality in wealth and income are at historic highs, with all of the attendant dangers of concentrated wealth and power, along with the burdens that fall disproportionately on communities of color and low-income communities. Our ecosystem is in crisis. A growing number of scientists believe that humans are fueling our headlong rush toward what is being called the Sixth Extinction—the Fifth Extinction wiped out the dinosaurs.

This is a grim picture of a long simmering crisis that is systemic in nature and created by our own hands. And yet, crisis is opportunity. The last two major economic crises, the Great Depression and the stagflation of the late 1970s, resulted in profound shifts in the dominant capitalist economic model. The Great Recession has shaken the faith in neoliberal capitalism and created an openness to thinking about new models. It will take a fundamental transformation of our system to draw us back from the brink. The solidarity economy offers pathways toward a transformation of our economy into one that serves people and planet, not blind growth and private profits.

The solidarity economy is a global movement to build a just and sustainable economy. It is not a blueprint theorized by academics in ivory towers. Rather, it is an ecosystem of practices that already exist—some old, some new, some still emergent—that are aligned with solidarity economy values. There is already a huge foundation upon which to build. The solidarity economy seeks to make visible and connect these siloed practices in order to build an alternative economic system, broadly defined, for people and the planet.

Defining the solidarity economy can be challenging. Definitions vary across place, time, politics, and happenstance, though there is increasingly a broad common understanding. This paper draws heavily on two perspectives. The first is the Intercontinental Network for the Promotion of the Social Solidarity Economy (RIPESS), which was formed in 1997 and connects national and regional solidarity economy networks that exist on every continent. The author is a member of the RIPESS Board and coordinated RIPESS’s global consultation to develop a stronger common understanding of the concepts, definitions, and framework of the solidarity economy. Through this process, RIPESS produced its Global Vision for a Social Solidarity Economy (2015) document. The other perspective that informs this paper is the U.S. Solidarity Economy Network (SEN), which was formed in 2007 at the US Social Forum in Atlanta. The author has served as SEN’s coordinator since its founding.

Source: The Next System Project