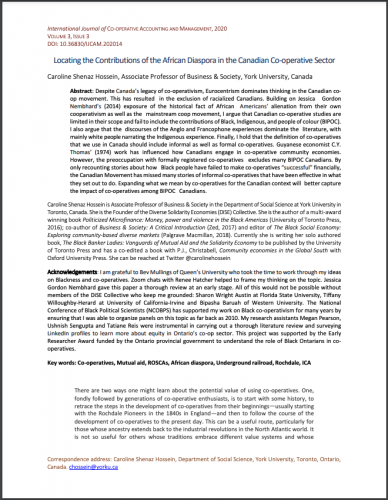 Despite Canada’s legacy of co-operativism, Eurocentrism dominates thinking in the Canadian coop movement. This has resulted in the exclusion of racialized Canadians. Building on Jessica Gordon Nembhard’s (2014) exposure of the historical fact of African Americans’ alienation from their own cooperativism as well as the mainstream coop movement, I argue that Canadian co-operative studies are limited in theirscope and fail to include the contributions of Black, Indigenous, and people of colour(BIPOC). I also argue that the discourses of the Anglo and Francophone experiences dominate the literature, with mainly white people narrating the Indigenous experience. Finally, I hold that the definition of co-operatives that we use in Canada should include informal as well as formal co-operatives. Guyanese economist C.Y. Thomas’ (1974) work has influenced how Canadians engage in co-operative community economies. However, the preoccupation with formally registered co-operatives excludes many BIPOC Canadians. By only recounting stories about how Black people have failed to make co-operatives “successful” financially, the Canadian Movement has missed many stories of informal co-operativesthat have been effective in what they set out to do. Expanding what we mean by co-operatives for the Canadian context will better capture the impact of co-operatives among BIPOC Canadians.