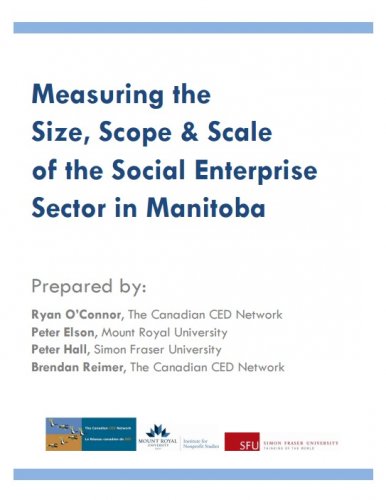 This project surveyed social enterprises in Manitoba during the spring and summer of 2011 to develop clear indicators of their size, market activities, and socio‐economic contributions. In this study, a social enterprise is defined as a business venture, owned or operated by a non‐ profit organization that sells goods or provides services in the market to create a blended return on investment; financial, social, environmental, and cultural. Using this definition, researchers identified 266 operating social enterprises in Manitoba. Of the 266 social enterprises that received the survey, 118 responded. Indicators of socio‐economic contribution included sales and revenue, expenditures, employment, volunteer engagement, and clients served and trained. Respondents were asked to report results of the 2010 financial year.

Prior to revealing the survey findings, this paper provides a brief history of the innovative approaches to community economic development that have been used in Manitoba. The province’s roots in community‐based economic models laid the foundation for Manitoba’s current social enterprises, which are found to be a diverse sector, composed of businesses meeting a range of poverty reduction, social, cultural or environmental goals.

This paper builds a strong case for stakeholders, community, funder, and government, to collaboratively value these distinct contributions and to support hospitable environments for social enterprises. This report is but the first of what is hoped to be a bi‐annual profile of social enterprises in Manitoba. As such, this report reveals some intriguing findings and other questions that will be addressed over time.

2011 Survey Findings at a Glance