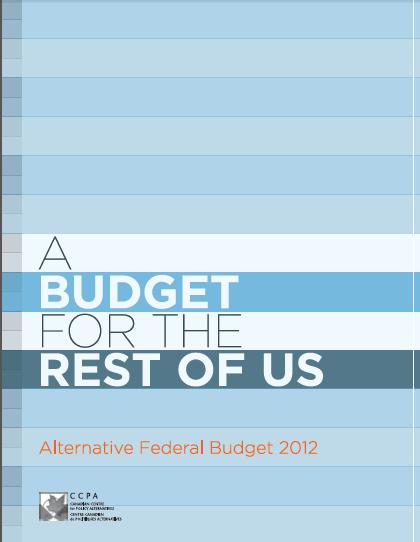 The federal government is planning an unprecedented fiscal austerity budget, claiming that massive cuts to public sector jobs, services, and social programs are necessary to pave the way for jobs and growth. But in fact the opposite is true. Austerity programs weaken the economy, and their implementation in many European countries has tipped the EU back into recession, fueled unemployment, and increased their debts and deficits.

There is a better way to make the federal budget work for the rest of us. The Alternative Federal Budget proposes a sweeping anti-austerity agenda that will yield high returns, boost productivity, stimulate private investment, and create high value-added jobs in activities that improve living standards and reduce income inequality.

1 | Reduce Poverty and Inequality
INCOME INEQUALITY IN Canada is at a 30-year high, rising at a faster pace than in the U.S.There are important aspects to income inequality that our government needs to address: the richest 1% of Canadians are now taking home a bigger share of income growth than since the 1920s; middle-income Canadians have seen their incomes stagnate; and nearly one in 10 Canadians—including one in 10 children—still lives in poverty. The poverty rate is even higher for Aboriginal peoples, women, and racialized Canadians.

This year’s AFB lays out a plan to reduce poverty in Canada by 25% within five years and by 75% within a decade. It re-establishes the federal government’s role in addressing growing market income inequality by redistributing the gains of economic growth so all Canadians benefit. It improves Canada’s social safety net and enhances public services— including education, affordable housing, and national child care—that support Canadians’ efforts to earn a decent living while balancing family commitments.

2 | Bring Down Unemployment
CANADA’S LABOUR MARKET is still much weaker than it was before the recession. In December 2011, Canada’s real unemployment rate was 10.6%, with just under two million Canadians either unemployed or underemployed. Since the start of 2009, the youth unemployment rate has been
over 14%. The AFB advances a job creation program that keeps the economy humming during uncertain global economic times and gets unemployed Canadians, including youth, working again.