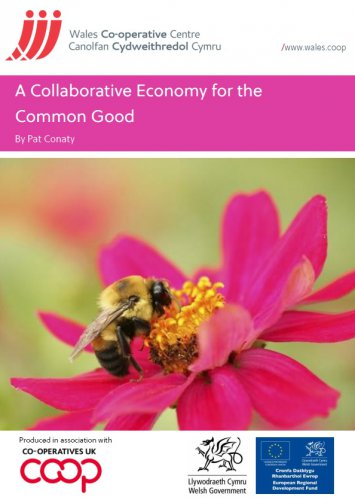 In the context of uneven growth and imbalanced recovery from the downturn across the UK, the report explores a new economic strategy for Wales. It draws on best practice and lessons from international case studies and what is currently emerging in Wales to develop the Collaborative Economy Model – an economic and regeneration strategy developed specifically for Wales. The Collaborative Economy model draws upon the Social Solidarity, Community Economic Development, and Foundational Economy models.

Between 2008 and 2012, the UK economy first slumped and then flat lined. Over the past two years a growth spike has occurred of about 2% annually. This headline figure, however, can be very misleading, because Greater London has been experiencing a boom whilst other regions, particularly in the north of England and Wales, have remained in a downturn. Indeed these regions may need a fundamentally new strategy to revive. This report considers evidence for how a collaborative economy model could provide concrete and practical guidance.

When times get hard, mutuality stages a revival and commonly fills the gaps where competition and markets have failed. We can see this increasingly with the growth of the new sharing economy, as evidenced by innovation in peer to peer lending, crowd funding and the far less publicised expansion of the co-operative sector.

Between 2008 and 2013, the membership of UK co-operatives increased by more than 17% to over 15 million, and the number of new co-operatives grew by 26%. The size of the co-operative economy expanded by over 13% in the wake of the banking crash and has outperformed the UK economy. Additionally over half the jobs in the UK are today provided by small and medium enterprises, of which 15% are social enterprises.

While the co-operative movement was founded in Britain over 200 years ago, many other European countries have been more successful since the 1970s in expanding the contribution of co-operatives and mutuals to their national economies. While co-operative businesses account for 2% of Gross Domestic Product (GDP) in the UK, they account for 8% in Germany, 10% in Italy and between 12% and 19% of GDP in Scandinavian countries. What is the secret of such striking success? This report investigates this key question and considers what we can learn, adapt and implement from these models to meet Welsh circumstances.