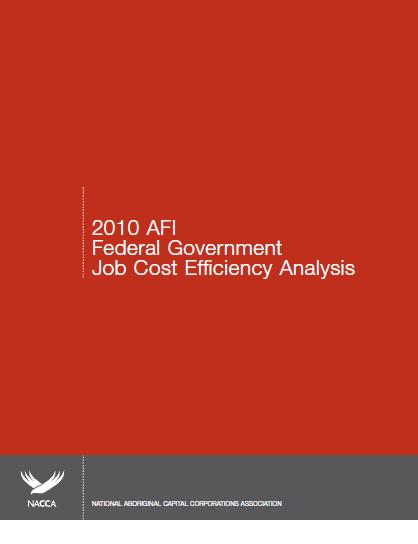 Aboriginal Financial Institutions (AFIs) were created by the Federal Government in consultation with Aboriginal leaders in the mid 1980s and early 1990s. The intended purpose of AFIs was to have them engage in the provision of repayable interest bearing loans to Aboriginal SMEs which were unable to secure loans from highly regulated conventional lenders in light of interrelated risk tolerance levels.

There are 55 AFIs actively engaged in the provision of development loans and support services to Aboriginal SMEs in all parts of Canada.

The five year success rate of AFI supported SMEs has, through an AFI pilot study supported by a search at the Business Register Statistics Canada, been determined to be 58%. Registry statistics also revealed despite the fact 42% of the SMEs appeared to have closed at some point during the five year period, actual payroll and employment increased over that which had been projected five years earlier e.g. actual payroll was 104% of projection, actual employee remittances were 106% of projection and actual employment was 96% of projection.

The most significant AFI individual client benefits such as the achievement of self reliance, improved self worth, improved standards of living for entrepreneurs and families associated with the provision of AFI small business loans and support services are difficult to measure in quantifiable terms. However, the costs of creating a job with AFI support are measureable.

In addition to AFI costs per job it is important to recognize some AFI clients may have been the benefactors of previous Government programming e.g. entrepreneurial, EI and disability programming. In other instances it is recognized AFIs played a pivotal role in obtaining conventional financing for Aboriginal SMEs. In 2010 alone AFIs enabled their clients to lever $20.8 million from private sector conventional lenders. In other words, while the creation and maintenance of jobs in AFI client businesses may not be within the exclusive AFI domain, without AFI participation it is reasonable to conclude such jobs would not have materialized.