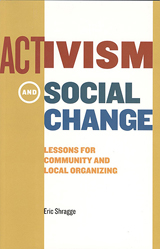 The book begins with the author’s reflection on several of his experiences in community organizing practice over the past 30 years as an introduction to his basic themes. The second chapter explores various theoretical models as well as historical traditions of community organizing with practice examples drawn from Quebec. The third chapter presents a survey of contributions to social action organizing from Saul Alinsky to the New Left, feminist, and other social movements, highlighting lines of continuity among and between them. The fourth chapter examines contemporary trends in, and problems associated with, community development practice, including a critical discussion of the community economic development model. Drawing on in-depth interviews, the fifth chapter analyses the future of local activism by integrating the voices and visions of young activists with theory and practice. The final chapter offers a way to understand the history, theory, and practice of local activism and community organizing within the context of the broader fight for social change.