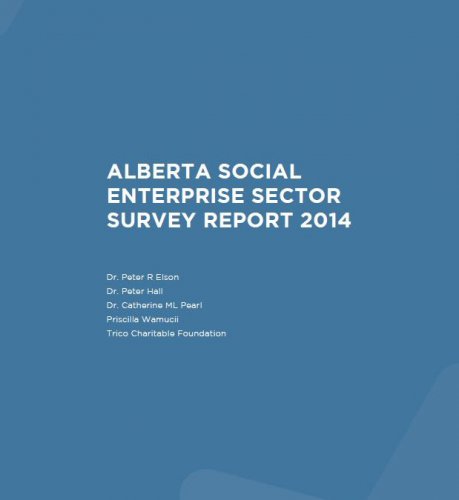 A scan of the local social enterprise economy

Social enterprise is evolving across Alberta: communities are supported, clients engaged, and ideation and creative innovation are being nurtured. Increasingly, Albertans are becoming aware and supportive of social enterprises operating within their local communities.

The third Alberta social enterprise sector survey was conducted in May and June, 2014, following previous surveys undertaken in 2010 and 2012. Respondents were asked to report on organizational activities during the previous operating period (e.g. the year to December 31, 2013). In addition to the presentation and analysis of the survey statistics, this report also reflects a series of findings from key thought leaders across the province invited in early 2015 to participate in the qualitative portion of this study. The key informant interviews were undertaken to explore in depth, the social enterprise milieu, emerging trends as well as perceived opportunities and challenges. Additionally, the report highlights areas within the data that provoked new questions concerning the Alberta social enterprise landscape and future research possibilities.

This study’s intent is to provide a contemporary portrait of the landscape of social enterprise in Alberta. It does not purport to represent a definitive compilation or summary of current literature or research on social enterprise across Alberta or Canada. Rather, through careful and considered examination, this report may be considered a barometer of what is occurring in Alberta at this point in time.

The quantitative data originating from the survey is presented in chapters, using a lens that incorporates three overarching characteristics – first, the community-based nature of social enterprises in Alberta; second, their particular focus on social and cultural missions; and third, the need for continued sector capacity building.

It is increasingly recognized that social enterprises can make a significant contribution to the provincial economy through community engagement, contribution to local economies, and through the building of social capital. Moreover, social enterprises can make money as they address their organizational purpose; whether economic, cultural, environmental or social. Social enterprise increasingly builds capacity – not simply capacity within an organization or its surrounding community, but also for some of Alberta’s most vulnerable citizens. For some observers, this may be perceived as an unintended consequence, however for other stakeholders, the fact that social enterprise may be used as a tool to train, to empower as well as build social capital, may indeed be one of its greatest assets and its potential promise going forward.

Based upon these overarching characteristics, the following key points were identified:

This report may be considered a resource to build understanding and extend learning regarding what is occurring across communities locally, nationally and internationally. Social enterprise is increasingly described as a social movement in Alberta, other Canadian provinces, and internationally; it points to a sea change that is occurring worldwide. Recognizing the timing of this report’s release, a broader community dialogue is encouraged in terms of the economic, social, cultural and environmental benefits that social enterprise can introduce to Alberta’s economy.