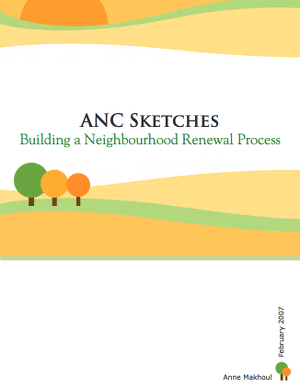 This paper was developed by a group of people brought together by the Action for Neighbourhood Change initiative. It presents an understanding of how change occurs in a neighbourhood which is based on previous and current community and neighbourhood revitalization efforts.

Action for Neighbourhood Change (ANC) is a two-year neighbourhood renewal initiative that seeks to improve the quality of life for the residents of neighbourhoods in five Canadian cities – Surrey, Regina, Thunder Bay, Toronto and Halifax. Interventions undertaken since the project began in March 2005 were based on the medical axiom of doing no harm, knowing that in the complex system of a neighbourhood, it is impossible to anticipate all the possible outcomes of actions. Beginning with a clear goal – neighbourhood renewal – provided a wide enough target that virtually any activity or starting point could be shown to help move residents in a positive direction. The short duration of ANC, however, made it necessary to focus on achieving a critical level of support for sustainability. Ultimately, residents must possess the skills, organizational capacity and self-confidence to address challenges for themselves.

ANC’s neighbourhood work is similar to that going on in many parts of Canada and internationally. It fits within the communities agenda, an idea which has yet to achieve a widely-recognized definition but which maybe understood as a framework for promoting strong and vibrant communities [Torjman forthcoming]. Though not yet fully articulated, the communities agenda is gathering strength as governments begin to recognize the importance of place-based initiatives and devolve power and finances to local orders of government [External Advisory Committee on Cities and Communities 2006]. ANC is significant in that it has been deliberate in trying to understand how change occurs – both on a large, conceptual level and on a practical, neighbourhood level.

ANC was conceived as an action research (learning by doing) project, recognizing that change can never be completely understood or described. Our appreciation of change rests on certain ideas or theories. This paper describes ANC’s current understanding of change at the neighbourhood level. It presents 11 sketches of work done in the five sites that demonstrate theory in action. It ends with an analysis which provides further feedback and insight into the theory of change itself.

This publication is modelled after one developed for Vibrant Communities – a pan-Canadian learning initiative launched in 2002 that brings together participants from many sectors in order to reduce poverty and enhance community vitality. In From the Field was produced to capture poverty-reduction strategies, and discern trends and lessons from which to draw future project directions [Cabaj, Makhoul, Leviten-Reid 2006]. Similarly, ANC Sketches provides a snapshot of projects which help planners to reflect on and refine their understanding of the change process. It also is meant to act as a resource to other neighbourhood or community organizers who wish to learn about effective interventions.