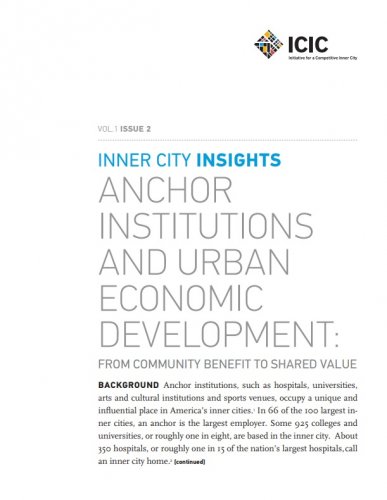 Many inner city anchors remain economically strong, even as cities fight job loss and historic levels of home foreclosures. Yet anchors’ relative economic health, combined with the fact that they can be seen as disconnected from their neighborhoods, often makes them a target of resentment. Too often, anchors are not seen as integral to the local economic fabric. As cities and other nonprofits face increasingly severe fiscal restraints, anchors are repeatedly called upon by government and non-profit organizations to support multiple community needs. In some cities, there is now a greater focus on anchors’ capacity to make payments in lieu of taxes.

There is another, more efficient way for anchors to bolster their local economies: by working with their communities to create shared value for both. Shared value, writes Initiative for a Competitive Inner City founder and Harvard Business School Professor Michael Porter, is defined as “policies and operating practices that enhance the competitiveness of a company while simultaneously advancing the economic and social conditions in the communities in which it operates… Shared value is not social responsibility, philanthropy or even sustainability, but a new way to achieve economic success.” The concept of shared value recognizes that anchors and their communities are inextricably bound together. As Porter writes, “A business needs a successful community, not only to create demand for its products but also to provide critical public assets and a supportive environment. A community needs successful businesses to provide jobs and wealth creation opportunities for its citizens.”

The Cleveland Clinic, which is ranked as one of the country’s top-performing hospitals and hosts 4.2 million patient visits each year, has been particularly forward-thinking in its efforts to create shared value. Over the past year, we have worked with the Clinic to develop a framework for anchor engagement. Our hope is that the framework presented here will allow us to explore the mutual benefits to be had via creative engagement and to learn from the