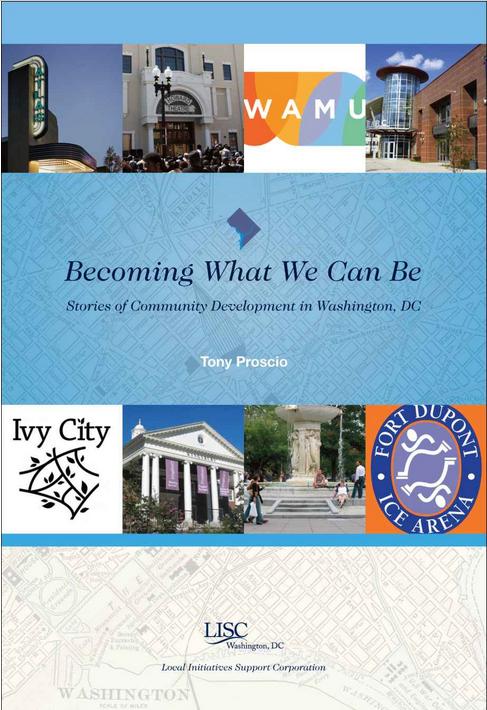 From the Foreword by James O. Gibson

Washington, DC, is in the forefront of older cities experiencing a resurgence of economic investment and cultural dynamism. The city is a leader of the new era of urban growth that is producing robust urban revitalization across the country after decades of decline. Downtown is newly vibrant with nightlife and is being repopulated with affluent empty-nesters and young professionals. New museums and monuments add glitter and vibrancy to the federal presence. A new state-of-the art convention center distinguishes Washington among the nation’s major meeting venues, and its office vacancy rate is the envy of other cities. In fact, new residential and commercial development and cultural and entertainment offerings are increasing in neighborhoods throughout the District.

Today’s resurgence in the city is neither an accident nor a random outcome of private investor enlightenment. Today’s Washington is the product of deliberate public policies, plans, and fiscal investments made over many years and is, in many respects, a testament to the efficacy of those plans and policies — despite a sometimes meandering and attenuated process of advancement and retrenchment that reflected the shifting dynamics of the market, demographic trends, and political leadership in the city and the region. Also, for all its strategic brilliance, in important ways Washington’s resurgence remains marred by serious inequity in the distribution of the benefits of the new wealth accruing from the positive changes now underway — changes that promise to continue over the long term.

The many engaging sagas recounted in this volume — and the sometimes heroic feats of individuals and organizations described so vividly — tell the history of a spectrum of community renewal activities that reaches beyond the scope of conventional urban redevelopment. What’s described here are unique contributions made possible by a frequently homely and sometimes stunning late-20th century invention called community development.

Community development frequently goes where the conventional market cannot reach, thereby addressing market failure. As the examples in this volume show, it can teach the market valuable and long-overdue lessons — like how to overcome racial and class bias. It can pace the market — for example, by finding power in small nonprofits and recognizing unconventional community ingredients for spectacular success. In the end, it validates the adage that “necessity can be the mother of invention.”

The collection of stories in this impressive volume also makes clear that outstanding achievements don’t happen by accident or magic. A substantial infrastructure of support is essential. The central, long-term role of LISC, the Local Initiatives Support Corporation, deserves great credit for being available over time to recognize the inherent worth of proposed ideas and strategies. In addition, numerous other individuals and organizations contributed creatively to raising and dispersing investment funds, to recruiting diverse kinds of expertise, to helping to mobilize Washington’s banks, and to forging new partnerships with District government and local foundations.

Most emphatically, as these stories disclose, the primary recognition must go to a cadre of outstanding, committed, and immensely creative men and women — a number of whom are celebrated in the stories that follow. Their visions and insights recognized and seized opportunities inherent in Washington’s regeneration. These visionaries viewed the surge of new wealth creation, stemming in large part from dramatic public investments, and fixed relentlessly on the question of “who benefits?”

The journey is not over, as palpable community needs affirm. The call for continuing, creative community development remains as strong as ever.

> To purchase an e-Book, visit Amazon.com or Smashwords.com