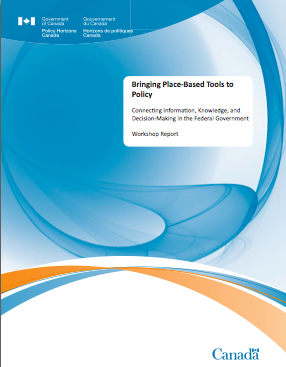 The federal government’s knowledge role within place‐based approaches has been identified by federal civil servants as an opportunity to improve the co‐ordination of federal departments and the compatibility of inter‐jurisdictional policies in Canada. To further explore this opportunity, the Government of Canada’s Policy Research Initiative (now Policy Horizons Canada) and its partners held a workshop on the federal knowledge role within place‐based initiatives.

The two‐day workshop, called Bringing Place‐Based Tools to Policy: Connecting Information, Knowledge, and Decision‐Making in the Federal Government, explored visions of how the federal government’s place‐based knowledge role can work towards federal strategic goals for sustainable development, in areas that include natural systems, communities, and overall well‐being. More than 90 participants, mostly federal public servants working on place‐based initiatives from a range of federal departments, participated in the event.

The workshop included formal panel presentations by speakers from the United States and New Zealand on emerging place‐based processes in those countries, as well as federal government and regional representatives providing highlights of current projects and practices within Canada. Much of the conference was devoted to group discussion focused on the federal government’s knowledge role within place‐based approaches and how to achieve more effective policy development processes. The workshop agenda and list of participants can be viewed in Appendix 1.

Participants observed that place‐based approaches are critical for addressing federal horizontal and inter‐jurisdictional issues, but the federal government’s approach is ad hoc and in need of clearer policy direction. Participants expressed a need for senior leadership to set a vision for a federal place‐based approach. They presented some possible visions for the federal government’s place‐based knowledge role specifically and explored means to achieve them.

Policy silos and differences in language presented some challenges in the workshop discussions. While the term “sustainable development” includes environmental, social, cultural, and economic dimensions, some participants felt it is often equated with the natural environment.

This report outlines the visions presented throughout the Bringing Place‐Based Tools to Policy workshop, expressed in six thematic areas: embracing place‐based integration; organizing the federal knowledge role; learning from past successes and evaluating outcomes; presence in the regions; generating collaborative knowledge and analytical tools; and a “decloaking” policy. Each theme is contextualized with the findings from Policy Horizons Canada’s on‐going research and departmental outreach activities, and followed by items for action as suggested by workshop participants.