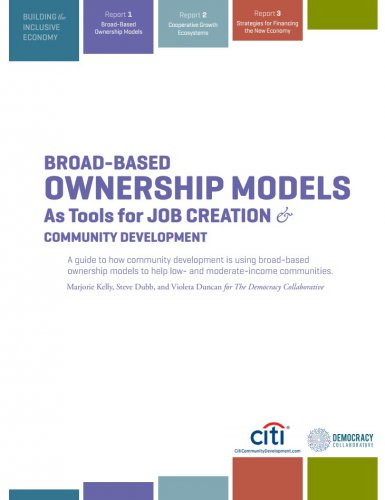 As cities wrestle with the growing challenge of wealth inequality, more and more leaders are looking to broad-based ownership models as tools to create jobs and build community wealth. These models are highly effective, with a positive impact for low- and moderate-income individuals and communities. This report looks at six such models, with examples of best practices, and explores how these models can be used in community economic development.

The Federal Reserve has also weighed in. For example, Chair Janet Yellen began a talk at the Bank’s 2014 Economic Opportunity and Inequality Conference by noting that “the distribution of wealth and income in the United States has been widening more or less steadily for several decades, to a greater extent than in most advanced countries.” Even Standard & Poor’s has spoken up. In a move unusual for a credit rating agency, it reported in 2014 that “income inequality in the U.S. is dampening GDP growth.”City leaders and community development practitioners are asking with great urgency: How can more and better jobs for low- and moderate-income people be created? As the search for solutions intensifies, more leaders are looking to broad-based ownership models as tools to create jobs and build community wealth. These models are poised for substantially greater use. That means there is a growing need for them to be better understood. Helping build that understanding is the aim of this guidebook.