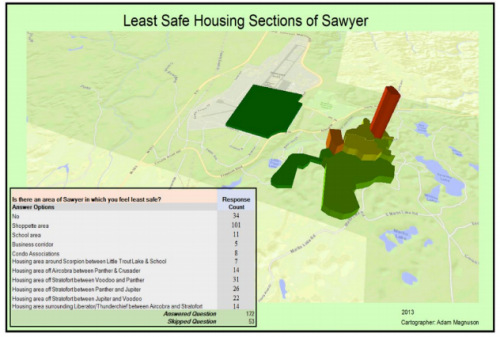 The United States Department of Defense has closed more than 350 military installations since 1989 and more closures are possible in the future. The closing of an air force base can have severe cultural impacts, leaving a community without an identity or sense of cohesion, and is especially traumatic in rural areas already struggling in a global economy. As an example, K.I. Sawyer Air Force Base, in Michigan’s Upper Peninsula, was closed in 1995 and resulted in a loss of 4,500 jobs with an estimated payroll of 100 million dollars per year, which has taken its toll on surrounding communities. Officials and citizens worked together to retain housing and create a community from the decommissioned air force base, now called K.I. Sawyer (Sawyer).

Today, Sawyer suffers from above average poverty rates and unemployment, blighted buildings, substandard housing, and a lack of services and places for safe, healthy community activities. Now home to over 1,000 households, a regional airport and technology park, it faces numerous obstacles to redevelopment—obstacles perhaps more pronounced than in surrounding communities, but not unique from many rural American communities across the country. Studies show successful community development is linked to good health and well-being, but many communities continue to struggle from underinvestment in community institutions, especially in rural America.

This study utilized a combination of qualitative and quantitative methods to: (1) examine the feasibility of potential community development projects measured by citizen support and, (2) determine methods for addressing negative perceptions of the community.

Key findings include a list of various assets for the community to build upon, as well as a list of community improvements residents would be most likely to support. Results show negative perception issues are long-standing, and are likely associated with: Sawyer’s controversial past, disorganization (including a lack of formal leadership and coordinated efforts), a lack of available basic services such as a gas station or grocery store, and a generally downtrodden ambiance in some parts of the community. In addition to being a young and evolving community, Sawyer lacks its own formal local governmental structure as well as lacking organized coordinated efforts to improve quality of life and services for residents of Sawyer. Community development projects will likely continue to be unsustainable until underlying structural, organizational and perception issues are addressed.