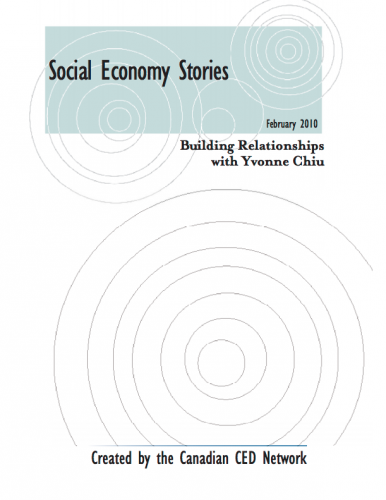 “The populations that are marginalized suffer from lack of political power, on one hand, and are quite invisible to the general  population, on the other,” she explains. “So their struggles and their stories aren’t heard and – in that invisibility – there’s a lack of understanding between the immigrant population and the general public.”

Meet Yvonne Chiu, Co-Executive Director of the Multicultural Health Brokers Co-operative in Edmonton, Alberta. It is a workers’ co-op made up of immigrant community workers that support immigrants and refugees through health education, community development, and advocacy.The co-op offers various services to newcomers in many languages and at no cost.

About the Social Economy Stories Project

The Social Economy is made up of civil society organizations that deliberately address social objectives through economic action, often aimed at creating greater social and economic equality and opportunity for people and communities most disadvantaged in our current economy. Co-operatives, credit unions and non-profit community organizations, are all part of the Social Economy. The blending of social and economic objectives is taking root across the world as the best means to replace dependency and exclusion with self-determination and self-sufficiency.

CCEDNet is a member of the global movement (RIPESS) that has formed to promote the Social and Solidarity Economy as the vehicle to transform global poverty and inequality. In Canada, CCEDNet and its partner organization in Quebec (le Chantier de l’économie sociale) have advocated for investment in a major national research program to generate evidence and understanding of the impact and potential of the Social Economy. This led to the creation of the Canadian Social Economy Hub with funding from the Social Sciences and Humanities Research Council. The program is co-led by CCEDNet and the University of Victoria’s BC Institute for Co-operative Studies, with several hundred research partners and projects throughout Canada.

Check out the phase one Social Economy stories

These “stories” capture the human face of the sector and demonstrate the Social Economy as a real movement that is addressing the social, economic and environmental challenges of today in integrative and innovative ways.