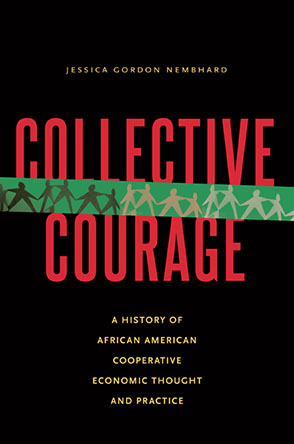 In Collective Courage, Jessica Gordon Nembhard chronicles African American cooperative business ownership and its place in the movements for Black civil rights and economic equality. Not since W. E. B. Du Bois’s 1907 Economic Co-operation Among Negro Americans has there been a full-length, nationwide study of African American cooperatives. Collective Courage extends that story into the twenty-first century. Many of the players are well known in the history of the African American experience: Du Bois, A. Philip Randolph and the Ladies’ Auxiliary to the Brotherhood of Sleeping Car Porters, Nannie Helen Burroughs, Fannie Lou Hamer, Ella Jo Baker, George Schuyler and the Young Negroes’ Co-operative League, the Nation of Islam, and the Black Panther Party. Adding the cooperative movement to Black history results in a retelling of the African American experience, with an increased understanding of African American collective economic agency and grassroots economic organizing.

To tell the story, Gordon Nembhard uses a variety of newspapers, period magazines, and journals; co-ops’ articles of incorporation, minutes from annual meetings, newsletters, budgets, and income statements; and scholarly books, memoirs, and biographies. These sources reveal the achievements and challenges of Black co-ops, collective economic action, and social entrepreneurship. Gordon Nembhard finds that African Americans, as well as other people of color and low-income people, have benefitted greatly from cooperative ownership and democratic economic participation throughout the nation’s history.

“The word ‘pathbreaking’ should not be used casually, but this is, in fact, a pathbreaking book. There is nothing like it. Jessica Gordon Nembhard’s study of Black cooperatives opens a door on a critical aspect of Black history in general and cooperative history in particular—a door very hard to open, given the challenges and difficulties with records and sources. What she has found behind the door is subjected to inspiring yet tough-minded analysis. The long trajectory of development Gordon Nembhard describes and the direction she illuminates offer profoundly important guidance as we enter an era of increasingly difficult economic and political challenges.”

—Gar Alperovitz, Lionel R. Bauman Professor of Political Economy, University of Maryland, author of What Then Must We Do? Straight Talk About the Next American Revolution