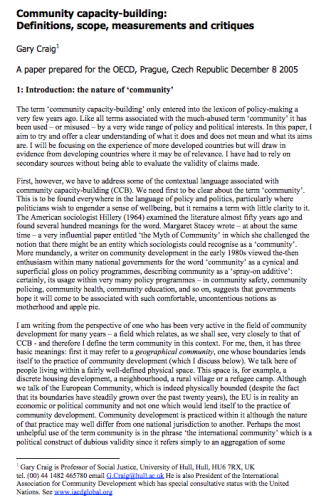 Introduction: the nature of ‘community’ (excerpt)

The term ‘community capacity-building’ only entered into the lexicon of policy-making a very few years ago. Like all terms associated with the much-abused term ‘community’ it has been used – or misused – by a very wide range of policy and political interests. In this paper, I aim to try and offer a clear understanding of what it does and does not mean and what its aims are. I will be focusing on the experience of more developed countries but will draw in evidence from developing countries where it may be of relevance. I have had to rely on secondary sources without being able to evaluate the validity of claims made.

First, however, we have to address some of the contextual language associated with community capacity-building (CCB). We need first to be clear about the term ‘community’. This is to be found everywhere in the language of policy and politics, particularly where politicians wish to engender a sense of wellbeing, but it remains a term with little clarity to it. The American sociologist Hillery (1964) examined the literature almost fifty years ago and found several hundred meanings for the word. Margaret Stacey wrote – at about the same time – a very influential paper entitled ‘the Myth of Community’ in which she challenged the notion that there might be an entity which sociologists could recognise as a ‘community’. More mundanely, a writer on community development in the early 1980s viewed the-then enthusiasm within many national governments for the word ‘community’ as a cynical and superficial gloss on policy programmes, describing community as a ‘spray-on additive’: certainly, its usage within very many policy programmes – in community safety, community policing, community health, community education, and so on, suggests that governments hope it will come to be associated with such comfortable, uncontentious notions as motherhood and apple pie.