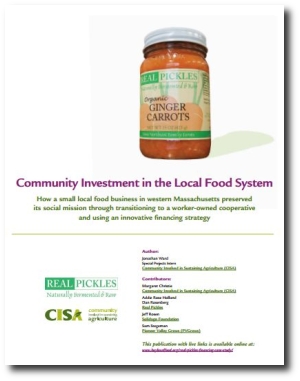 “We’re re-writing the standard storyline for a successful organic food business,” says Dan Rosenberg, founder of the twelve-year-old Greenfield, Massachusetts company Real Pickles, which makes naturally fermented and raw pickles from regionally-grown vegetables in a 100% solar-powered facility. Instead of selling their growing company to a large industrial food corporation, as happens so often with successful natural products businesses (think: Odwalla, Naked Juice, Tom’s of Maine, Stonyfield, and so on), Rosenberg and his wife Addie Rose Holland (who had joined him in running the business in 2004) went the other direction, deciding to keep Real Pickles small, locally owned, and mission-driven. In late 2012, Rosenberg and Holland formed a worker-owned cooperative with other staff members, and funded the co-op’s purchase of the business through a highly successful community investment campaign that raised a half-million dollars.

With interest growing in scaling up local food systems, the story of Real Pickles’ co-op transition and community investment campaign offers important lessons. Communities need businesses that can model ways to stay small, vibrant, and locally owned. This story is both inspirational and rich in technical detail so that others can speak about it, replicate it, and, ultimately, build upon it to fit their own visions of resilient local economies.