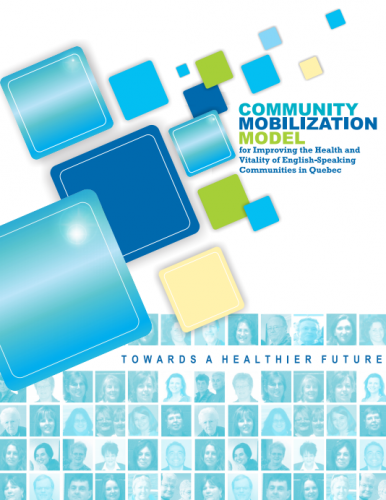 A Model Reflecting a Decade of Experiences and Successes

For more than ten years, minority English-speaking communities in the province of Quebec have been engaged in collective efforts to improve their health and vitality. As a minority linguistic community (13% of the total population) they face many challenges such as difficulties accessing essential services in their language; a sense of being socially excluded and stereotyped; and a lack of community leadership to affect change in a coordinated and proactive way.

Through a government and community-based funding partnership, a decision was made to create minority community health networks at regional and local levels. The networks began functioning in two areas and eventually added a third. These areas are:

Once this knowledge base was effectively communicated to majority stakeholders, a climate for inter-sector collaboration and partnerships was established. Today, over 800 formal partnerships have been created between the community health networks and their services providers.

The Community Health and Social Services Network (CHSSN) serves as the backbone organization for this work and supports members of the twenty community health networks that recently came together to design a collective vision and approach to development based on their past successes and experiences.

Unique to this model of development for minority communities is an empowering vision of the future to become leaders of change. The model defines a value system that guides actions and an articulated set of development principles unique to their own experience. It also identifies strategies and priority areas of action that will have the greatest impact in creating continued and sustainable change.

Introduction
Part 1: English-Speaking Communities in Quebec
Demographics of the English-Speaking Population
Outmigration and Social Support Networks for Seniors
The Challenge of Socio-Economic Inequalities
Language as a Determinant of Health Status and Service Quality
Sense of Belonging and Civic Engagement
Part 2: The Model
Origins of the Model
Collaboration with Quebec’s Ministry of Health and Social Services (MSSS)
The Networking and Partnership Approach
Defining Target Populations and Priority Health Determinants
Development Principles
Values
Conclusion