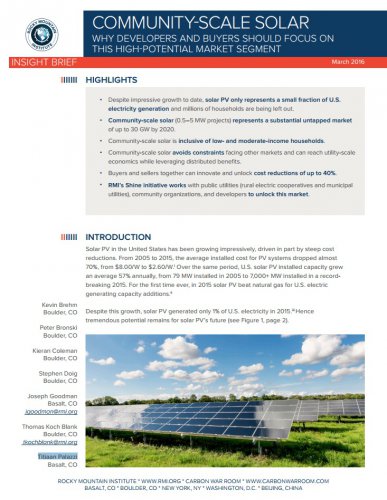 Solar photovoltaic (PV) in the United States has been growing impressively, driven in part by steep cost reductions. From 2005 to 2015, the average installed cost for PV systems dropped almost 70%, from $8.00/W to $2.60/W.i Over the same period, U.S. solar PV installed capacity grew an average 57% annually, from 79 MW installed in 2005 to 7,000+ MW installed in a recordbreaking 2015. For the first time ever, in 2015 solar PV beat natural gas for U.S. electric generating capacity additions.

Despite this growth, solar PV generated only 1% of U.S. electricity in 2015.Hence tremendous potential remains for solar PV’s future.

Utility-scale and behind-the-meter solar will both play a large role in a high-solar-penetration future, but both solar market segments could face headwinds in the years ahead. Utility-scale solar could face transmission constraints and siting challenges. Behind-the-meter solar, which in most places benefits from retail net energy metering, faces challenges to its economics in places where export compensation is being reduced to avoided cost, wholesale rates, or other terms less than the retail rate (such as in Hawaii and Nevada).

Yet between traditional behind-the-meter (e.g., residential rooftop) and utility-scale solar exists a substantial untapped opportunity, one that can expand the U.S. solar market and provide affordable solar energy access to millions more Americans.