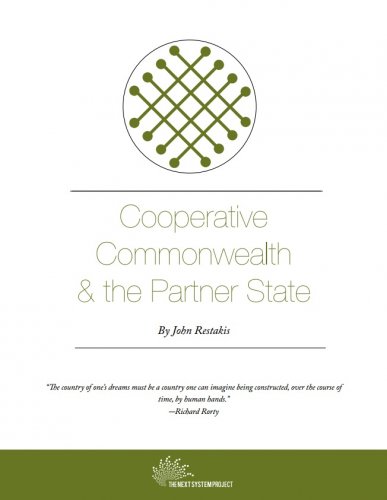 We must begin with some basic first principles. The form of political economy that I advocate is a pluralist, cooperative commonwealth based on the principle of economic democracy in service to the common good. Its purpose is to reinforce and reward human solidarity, to care for the planet, to nurture community, and to support the fullest realization of one’s aspirations as a social being.

Cooperative commonwealth is not a new idea. It has been expounded for over 150 years and its theorists and practitioners have set out in detail how such an economic system might work, in the context of their own times. From the ideas of Robert Owen and William Thompson in the early years of the cooperative movement, to the guild socialists of the interwar years, to current theorists of peer-to-peer production networks and the commons, an economy based on collectively owned, democratically organized, and self-governing cooperative enterprises and institutions has been a central pillar of the socialist alternative to capitalism. But there are many brands of socialism.

What I propose is a form of civil socialism wherein democratically structured civil institutions are the organizational basis of the economy, as opposed to forms of state socialism, which are organized around centrally planned systems controlled by the state. In both cases socialism, in which economies are meant to serve the common interest, provides the primary ideological counterweight to capitalism, in which capital controls economies in the service of private interests.