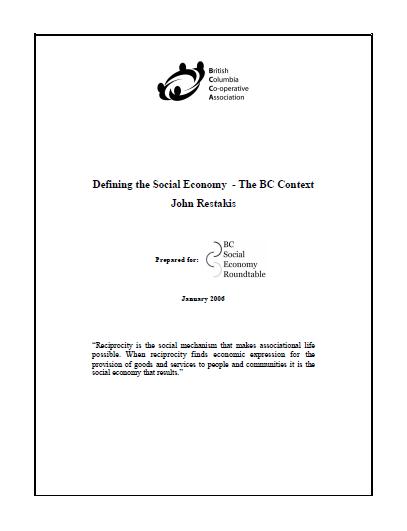 Over the course of the last two centuries, there has been an ongoing struggle to interpret and relate the practice of economics and the development of economic institutions to the question of social benefit. This struggle continues unabated today, and one of its features is the debate surrounding the meaning and ultimate role of the social economy. But despite this current interest, there is little theoretical understanding of the meaning of this term outside of academic circles. Many definitions currently in use reflect a partial or biased meaning or a listing of highly selective activities or constituencies that are then bundled under the umbrella ³social economy². What is needed is a clearer definition of the underlying economic principles as well as social attributes that distinguish social economy organizations from other types of organization.

The absence of such a definition means ³social economy² still has a very subjective and inexact meaning and one prone to misleading interpretations that are either too inclusive on the one hand, or too restrictive on the other. For instance, while some would restrict social economy organizations only to non-profits others would include conventional private companies who contribute a portion of their profits to social ends. This paper is part of a wider initiative that has been sponsored by the BC Social Economy Roundtable and funded jointly by the federal government and the Vancity Credit Union. The Roundtable is an informal body with representatives from key social economy organizations and stakeholders that have come together to promote the growth and development of the social economy in British Columbia (see Appendix).