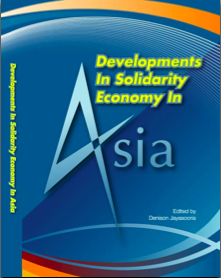 Solidarity Economy (SE) is a movement that has been around for a few decades, even if it was not always called by that name.  Its primary philosophy is to conduct business in a way that does not exploit people, protects the environment for future generations, and distributes profits fairly to stakeholders.

Profits are also ploughed back into sustaining enterprises for the long-term.  Such initiatives include fair trade businesses, cooperatives, credit unions and micro-credit or micro-financing.  At the heart of Solidarity Economy is social justice, and its ‘triple bottom line’ of people, planet and profit succinctly captures the spirit of the movement.

In recent times, SE advocates have been exploring and promoting the idea of such an economic system as an alternative to the present market-driven, neo-liberal economy.  This comes as the world acknowledges the failings of capitalism as seen from one financial crisis after another.

A general assessment of SE across Asia shows a picture of strong individual initaitives and some regional networks.  Achievements are presently limited to empowerment of the immediate local community without much further reach or scale beyond that.  However, there is tremendous potential and therefore we must build on these and scale up operations, outreach and impact.

There is a clear need for greater networking and capacity building for regional institutions.  The course of action is two-fold, first for individual SE actors, and second for SE networks.

Individual SE actors must network with other organizations at local, national, regional and international levels.  They must also network with local, district/privincial or state, and national governments, as well as with universities, research institutions and academia.  They must build capacity for their individual enterprises, which include developing good governance, adopting SE principles internally, develop community sources of capital, and transforming mind-sets.

For networks, they must chart a value chain for their region or even internationally, develop regulatory or governance structures, and lobby governments for conducive policies and laws.  When individual enterprises are strong enough to become part of a network, and networks can scale up to become a regional force linking with other networks, Solidarity Economy as an alternative can be much closer to becoming a reality.

The ASEF 2011 (Asian Solidarity Economy Forum, Kuala Lumpur) held from October 31 to November 2, 2011 explored ways to translate individual SE initiatives into a larger economic system.  Social enterprises are already widespread.  The weakness, however, is the tendency to function in isolation.  SE actors need to jointly develop strategies to overcome barriers that prevent SE from becoming a viable, credible alternative to capitalism.

This publication entitled Developments in Solidarity Economy in Asia contains 19 chapters and is divided into four parts.  It captures an overview of SE developments across Asia and the proposed strategies to scale the movement up to the next level with a wider reach.