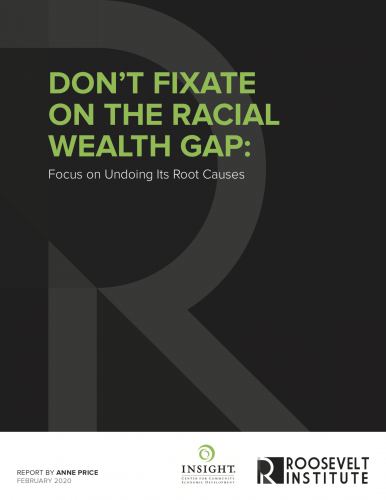 Inequality is a defining American issue, and perhaps no measure more accurately exemplifies the failures and injustices of historic and current-day economic decisions than the “racial wealth gap.” In the current political moment—when bold ideas to rebalance economic and political power, especially by race, are central to public debate—we have the opportunity to reevaluate how we think about racial inequality and how our current economic system has exacerbated it.

In Don’t Fixate on the Racial Wealth Gap: Focus on Undoing Its Root Causes, Insight Center for Community Economic Development President and Roosevelt Fellow Anne Price examines how focusing on the root of racial wealth inequality rather than fixating on the racial wealth gap can help us build a path toward a fairer and more sustainable economic and political system—one that will right our historical wrongs and prevent such injustices from occurring in the future.

About the Insight Center
The Insight Center is a national research and economic justice organization working to ensure that all people become and remain economically secure. Race- and gender-based wealth inequities are two of the greatest failures of the American economy. We expose hidden truths to unearth and address the root causes of economic exclusion and racial inequity

About the Roosevelt Institute
Until the rules work for every American, they’re not working. The Roosevelt Institute is a think tank and student-driven national network that believes in an economy and democracy by the people, for the people. The few at the top—corporations and the richest among us— hold too much wealth and power today, and our society will be stronger when that changes. Armed with a bold vision for the future, we want our work to move the country toward a new economic and political system: one built by many for the good of all.