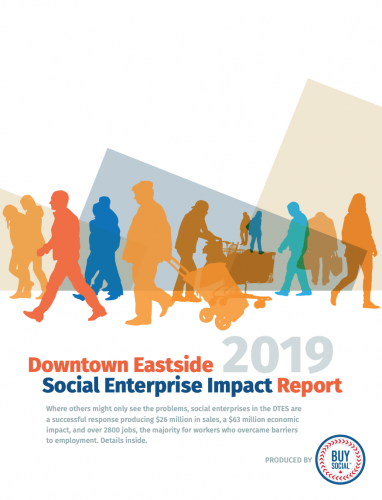 WHEN MILTON FRIEDMAN SAID, “There is one and only one social responsibility of business– to use its resources and engage in activities designed to increase its profits …” he could not have been more wrong when it comes to social enterprise business models in Vancouver’s Downtown Eastside (DTES).

That traditional business model of financial profits as the key indicator of success is not nearly the actual story when it comes to the community economic and employment outcomes for the more than 40 DTES social enterprises surveyed.

The DTES and the surrounding area is so often only seen as desperate and hopeless, a problem-laden community. In fact, in “the mayor’s own description, the DTES is now ‘worse than I’ve ever seen it.’ ” Definitely it is a neighbourhood facing multiple issues, structural poverty and drugs, and a list of others.

But there is another picture, another story, that this survey tells us about the community – a story of hope, emerging opportunities, and a community business model, social enterprise, that may be causing Mr. Friedman to turn over in his grave!

Social enterprises are businesses that focus on their community value, whether social, cultural or environmental; and they re-invest at least half of their profits back to that purpose. In this survey, almost all surveyed social enterprises are incorporated as non-profits or charities, a few are Community Contribution Companies, and a couple are forms of cooperatives.

Survey results demonstrate the enhanced value created by social enterprises. Yes, there is clearly an economic value, but also there is significant local and targeted employment, cultural contributions, and environmental impacts that social enterprises are making in the inner city of Vancouver.

Social enterprises in the DTES have a significant direct financial impact. Total revenues of the surveyed social enterprises totals $36,990,938, revenue from sales of $26,492,685, if we use the recent LOCO evidence of the areas economic multiplier, the result is an economic impact of $63,476,449 in the local economy.