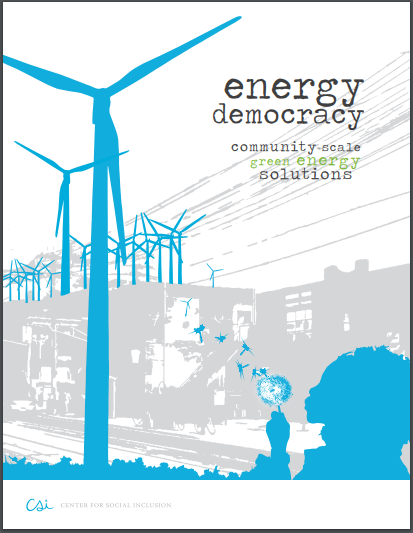 If the 34 million American households of color resided in a single state, their household electricity demand would exceed that of all the residential, commercial, and industrial users in California, the state with the highest electricity demand in the country. Households of color demanded as much as 385 billion kilowatt hours of electricity in 2009. Based on the most recent retail price data available, this translates to $41 billion in electricity buying power. This buying power will likely climb for the foreseeable future. The number of households of color in the United States is projected to increase to 56 million by 2030 and reach an estimated 80 million by 2050. Communities of color are clearly significant consumers of electricity. Could they be significant producers, too?

With worldwide demand for energy exploding, the race is on to make greater use of renewable energy. Wind, solar, geothermal, and bio-fuels offer clean and potentially inexhaustible supplies. Technology is advancing rapidly toward making these energy sources accessible and competitively priced.

Yet scholarship, policy, and market innovation have not explored community-generated renewable energy. Nor have we considered communities of color as part of our energy future. Now is the time to do so. This paper outlines an approach to Energy Democracy. The goal of Energy Democracy is to create community-owned or controlled renewable energy and invest that capacity with democratic principles that foster interdependence, conservation, wealth-building, political autonomy, and economic opportunity. Small-scale, locally owned or controlled renewable energy projects can be structured to allow local investment, sweat equity, and a transparent process for setting fair prices.

Energy Democracy is a policy framework with the goal of transforming neglected and isolated communities—often poor, and often communities of color—into energy producers who contribute to the nation’s overall capacity, add clean energy to the grid, enhance their economic and political ties across the region, and supply their own energy needs. Without intervention, communities of color risk missing a transformative opportunity for a meaningful role in America’s changing energy economy. With people of color fast becoming half of the national population, this would be a loss for both communities of color and the nation.

This white paper explores the challenges and opportunities communities of color face as participants in a renewable energy economy. With the right ownership models, clear and supportive tax incentives and finance policy, reformed land use and zoning policies, and equitable access to the grid, emerging technology allows communities of color to establish themselves as power producers. This white paper is focused on communityowned, small-scale renewable generators in electricity markets.

Communities of color that become energy producers will transform their relationships with the larger regional economy, bringing improved infrastructure, increased wealth, and greater political interdependence between communities of color and their neighbors. This potential requires informed leadership and innovative policy to become a reality. The following recommendations represent the first steps.