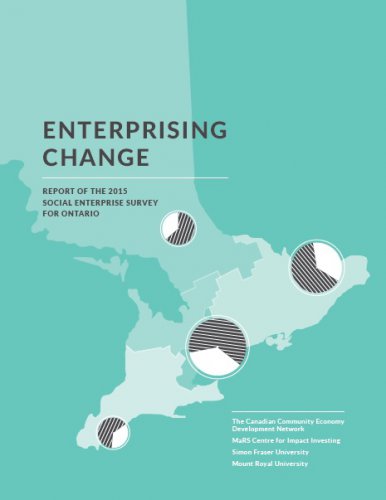 The 2015 Social Enterprise Survey for Ontario sought to provide a snapshot-in-time profile of this Ontario’s social enterprise sector, in order to increase awareness and inform actions to support its development.

This report builds on previous research that the Canadian CED Network conducted in 2012, titled ‘Inspiring Innovation: the Size, Scope and Socioeconomic Impact of Nonprofit Social Enterprise in Ontario’. It also contributes to the national profile being created through similar surveys which have been conducted across the country – so far British Columbia and Alberta have been surveyed three times; Manitoba, Nova Scotia and New Brunswick twice, and Prince Edward Island, Newfoundland/Labrador, Yukon, Nunavut and the Northwest Territories once. A survey is currently under development in Saskatchewan. All of these reports contribute to a better understanding of a national entrepreneurial movement within the nonprofit sector.

The following are the appendices for the report. Only Appendix A and B are included in the full report. The rest can be viewed at the link below.