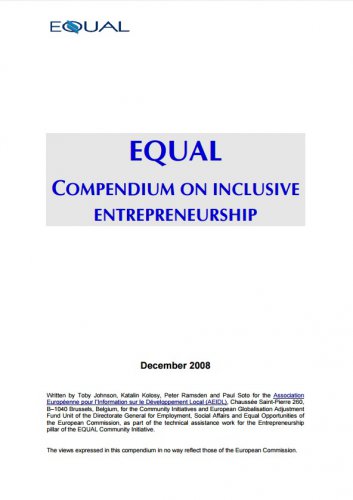 This compendium draws together the lessons learnt on the subject of inclusive entrepreneurship during the EQUAL programme, which ran from 2002 until 2007. As a Community Initiative within the European Social Fund, EQUAL’s role was to provide an experimental laboratory within which new methods could be developed, through transnational working, to reduce inequality and discrimination in employment. EQUAL supported projects in four pillars – employability, entrepreneurship, adaptability and equal opportunities. The entrepreneurship projects fell into two themes – business creation and the social economy.

To make its lessons stick, EQUAL adopted an innovative operating method. Rather than support time-limited projects, it obliged project promoters to combine to form ‘development partnerships’. These brought together different types of organisations – for instance local authorities, colleges, employers and trade unions – so that a collaborative network was built up which would outlive EQUAL and increase capacity permanently. EQUAL also placed great importance on mainstreaming – that is, making a real difference by creating changes in policy and practice.

EQUAL’s 634 entrepreneurship projects involved some 5,000 partner organisations across 18 of the European Union’s Member States. Their work was overseen by a European Thematic Group1 under whose auspices a series of events and mainstreaming actions took place.