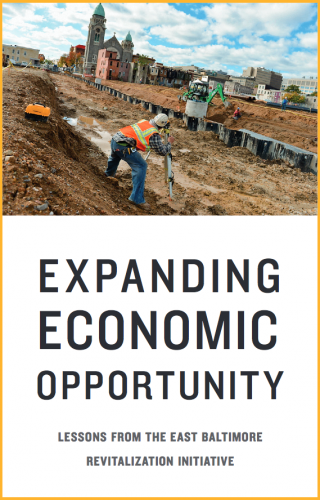 This report reviews the economic inclusion achievements and challenges of the East Baltimore Revitalization Initiative, a major community development project. It examines the use of local residents in construction jobs through a workforce pipeline. The pipeline trained and placed East Baltimore residents in jobs generated by the new development or elsewhere in the city. The reader also learns how the East Baltimore Development Inc. (EBDI) nonprofit and its partners connected minority-owned businesses to the project. The report cites examples of similar initiatives around the country and provides lessons learned for government leaders, businesses and nonprofits interested in economic inclusion.

More than a dozen years ago, city, state and private-sector leaders launched a major initiative to revitalize an economically distressed neighborhood in East Baltimore bordering the world-renowned Johns Hopkins medical campus. Local residents had seen the area suffer from disinvestment over many years, and the neighborhood was plagued by high rates of unemployment and poverty and a large number of vacant or abandoned buildings. The East Baltimore Revitalization Initiative began in 2002 as a $1.8 billion effort to create biotechnology research space, new mixed-income housing, commercial development and other amenities in a rejuvenated community. Among the key partners were the city of Baltimore, state of Maryland, the Johns Hopkins University and other institutions, including the Annie E. Casey Foundation. Over time, the plans for the initiative expanded to involve, among other things, a new K–8 school and early childhood education center.

Although the Great Recession slowed the project, development activity on the 88-acre site has advanced. The project has created new and rehabbed homes; the new Elmer A. Henderson: A Johns Hopkins Partnership School, which has a family resource center and community amenities such as an auditorium and gymnasium; the Harry and Jeanette Weinberg Early Childhood Center; a biotechnology research building; a state public health laboratory; a high-rise building for student housing; and retail space. Plans are in place for additional lab and office space, more mixed-income housing, a hotel and a community park.

Along with the physical redevelopment, the initiative made it a priority to foster economic inclusion, which involves using various strategies to help low-income residents of the area and the entire city get jobs and to assist minority- and womenowned enterprises in obtaining contracts generated by the project. Led by a special-purpose nonprofit, East Baltimore Development Inc. (EBDI), the project has implemented many of its economic inclusion goals and has achieved strong results, though it has fallen far short of early estimates for the number of jobs it would create.