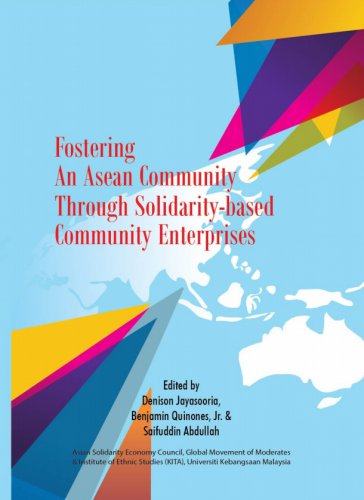 ASEAN had a fruitful discussion and this documentation arises as a fruit of this participatory process of sharing, deliberating and drawing out an agenda for the future of community based enterprises in the ASEAN region. This document entitled “Fostering an ASEAN Community through Solidarity-Based Community Enterprises” is divided into three parts:

Part one documents the Joint statement issued by ASEC & GMM on April 25, 2015, the executive summary of the findings, and the Seven Point Strategy for integrating community based enterprises in the ASEAN Economic Community.

Part Two is a comprehensive summary of the panel presentations and deliberations which serves as an essential resource material. And finally

Part Three provides more details of the presentations especially the framework paper presented by Dr Ben Quinones. It is important to note that the earlier ASEC publications entitled Sowing the Seeds of Solidarity Economy (2012) & Developments in Solidarity Economy in Asia (2013) document the growth and development of solidarity economy at the grassroots in this region as the people’s response to the dominant business model which marginalizes and alienates the vast majority of the people. Solidarity economy is an altenrative economy that is people empowering, and promotes equitable share of economic growth as well as sustainable use of the natural resources.

It is hoped that this publication will further strengthen the academic and policy discussions on the relevance of community based enterprises as a key vehicle for the realisation of the ASEAN goal of building an inclusive, people to people ASEAN.

It is ASEAN’s vision that both policy makers and academics will study this document and in the coming months provide the space for the further articulation of community based enterprises as a catalyst for not just realising the goal of sustainable development but see this as a key component in building a peoples’ ASEAN.