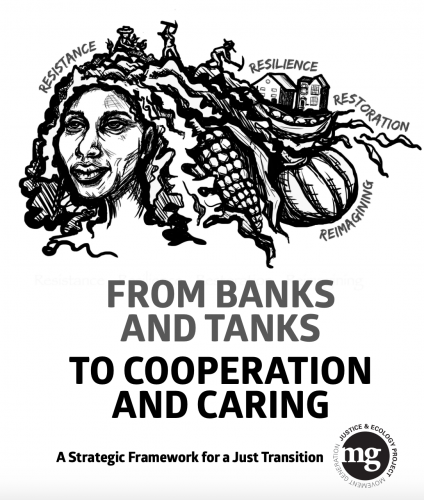 Just Transition is a framework for a fair shift to an economy that is ecologically sustainable, equitable and just for all its members. After centuries of global plunder, the profit-driven, growth-dependent, industrial economy is severely undermining the life support systems of the planet. An economy based on extracting from a finite system faster than the capacity of the system to regenerate will eventually come to an end—either through collapse or through our intentional re-organization. Transition is inevitable. Justice is not.

Just Transition strategies were first forged by labor unions and environmental justice groups who saw the need to phase out the industries that were harming workers, community health and the planet, while also providing just pathways for workers into new livelihoods. This original concept of Just Transition was rooted in building alliances between workers in polluting industries and fence-line and frontline communities. Building on that history, Just Transition to us represents a set of aligned strategies to transition whole communities toward thriving economies that provide dignified, productive and ecologically sustainable livelihoods that are governed directly by workers and communities.

A Just Transition requires us to build a visionary economy for life in a way that is very diff erent than the economy we are in now. Constructing a visionary economy for life calls for strategies that democratize, decentralize and diversify economic activity while we damper down consumption, and (re)distribute resources and power.  Just Transition initiatives shift the economy from dirty energy to energy democracy, from funding highways to expanding public transit, from incinerators and landfills to zero waste, from industrial food systems to food sovereignty, from gentrification to community land rights, and from rampant destructive development to ecosystem restoration. Core to a Just Transition is deep democracy in which workers and communities have control over the decisions that aff ect their daily lives.

The Movement Generation Justice & Ecology Project inspires and engages in transformative action towards the liberation and restoration of land, labor, and culture. They are rooted in vibrant social movements led by low-income communities and communities of color committed to a Just Transition away from profit and pollution and towards healthy, resilient and life-affirming local economies.

This booklet is offered as a humble point of departure for people interested in building a collective vision and strategy framework for Ecological Justice that does not separate humans from nature or social equity from ecological integrity. The evolution of the thinking behind it has been an ongoing journey with hundreds of folks over many years from diverse movements.